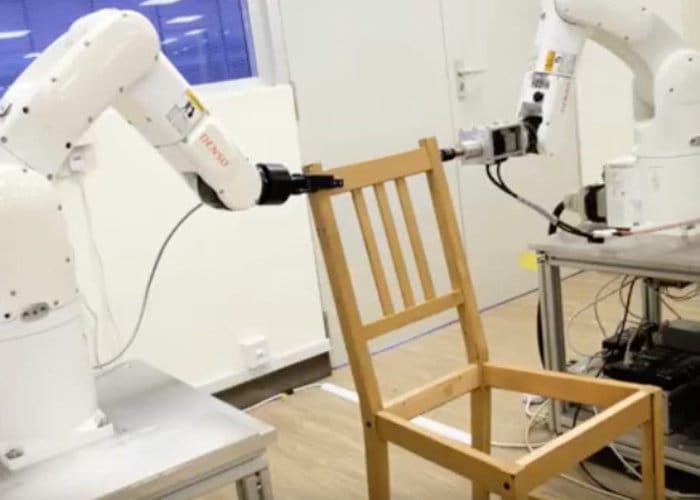 Researchers at Nanyang Technological University (NTU) in Singapore, have created algorithms that enable robots to construct an IKEA chair in approximately 20 minutes. The new robot arms are built using off-the-shelf components and when confronted with the IKEA’s solid wood Stefan chair, the robot spent 11 minutes and 21 seconds planning its motion pathways, 3 seconds locating the parts and then 8 minutes and 55 seconds to complete the assembly. Check out the video below to learn more.

The robot has been built using a variety of components include a 3D camera, parallel grippers on the end of industrial robotic arms capable of six-axis motion, together with force sensors mounted on the wrist. Enabling the robot to recreate the human ability to handle and put together intricate objects. “For a robot, putting together an IKEA chair with such precision is more complex than it looks,” says Assistant Professor Pham Quang Cuong, who designed the robot with his team from NTU’s School of Mechanical and Aerospace Engineering. “The job of assembly, which may come naturally to humans, has to be broken down into different steps, such as identifying where the different chair parts are, the force required to grip the parts, and making sure the robotic arms move without colliding into each other. Through considerable engineering effort, we developed algorithms that will enable the robot to take the necessary steps to assemble the chair on its own.”

For more information on the robotic assembly line jump over to the New Atlas website by following the link below.