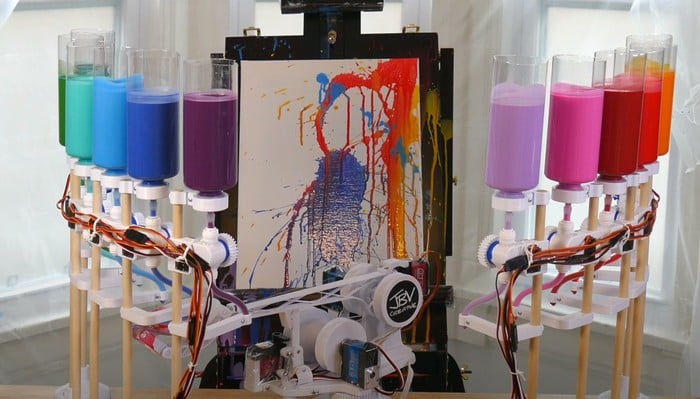 JBV Creative has built an artistic Arduino robot that creates paintings by flinging paint to canvas in a similar way to that of the famous painter Jackson Pollock. Rather than painstakingly dipping brush into paint and flinging it onto a canvas similar to Pollock the robot uses a more sweeping style using spoonfuls of paint which are flung at the canvas from a distance hence the name Flingbot. Check out the video below to learn more about its mechanics and painting technique which uses 12 reservoirs which are filled via gravity feeders and a servomotor controlling how much paint is deposited on the spoon.

“Using engineering to create art! Instead of painting my own paintings, I decided to build a robot to do it for me. Obviously, a robot that throws paint at a canvas via a servo powered catapult was the only way to go here…”

“To my surprise, it actually worked! Flingbot created paintings that far exceeded my own personal ability to paint (This was the main reason for my Engineering degree, right?). Using some randomized Arduino code that picks from a plethora of different parameters, Flingbot’s paintings are truly one of a kind. Based on the parameters and some basic combination math, I estimated that Flingbot is capable of 3 trillion different painting possibilities (the number is likely higher due to variables out of Flingbot’s control).”

To learn more about the robotic art created by the Flingbot jump over to the Arduino blog by following the link below.