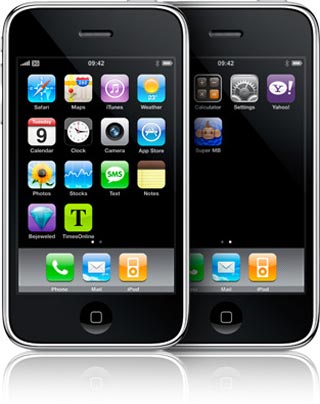 I thought it was about time to review the 3G iPhone as I have had it for a few weeks now and have had a good chance to test it.

Although this is my third 3G iPhone, the first one developed a dead pixel after about two weeks, I got my replacement took it home and plugged it in only to notice that the new one had two dead pixels, what are the odds of that, despite the problems I have had I absolutely love it.

Ok so it is not as much as a leap forward in technology as the 2G iPhone was but the one thing that sets it apart from the first generation iPhone is the 3G.

When I first got it I wasn’t to impressed with the 3G speeds, as pages took almost as long to load as they did with edge, but the latest update has solved this and you can notice a massive difference when browsing the web or checking your emails. The browsing seems to be at least twice as fast as before, and it seems just a little slower than WiFi.

They have also fixed one of the most annoying things from the 2G iPhone, the headphone port, it will now accept standard 3.5mm headphones without having to hack them to bits to get them to fit.

Another great new addition to the 3G iPhone is the GPS, the iPhone uses assisted GPS, which uses satellites and nearby mobile phone masts and Wi-Fi hot spots to triangulate your position, so it will be interesting to see what sort of iPhone Apps using GPS become available.

And that leads us on to the iPhone App Store, this has to be the best feature of the new 3G iPhone, and luckily enough for 2G owners Apple were smart enough to upgrade all versions of the iPhone to this amazing new feature.

The host of iPhone Apps available are amazing and I am still spending most of my time sifting through them, there are just so many to choose from.

Overall I would give the 3G iPhone a 9/10, Apple have improved on what was a revolutionary mobile phone and made it even better, and if your an existing 2G iPhone owner looking to upgrade to the 3G iPhone like me, it is definitely worth it as the 3G is a huge improvement over Edge.

Check out Test Freaks for more mobile phone reviews and reviews of the Apple iPhone 3G.