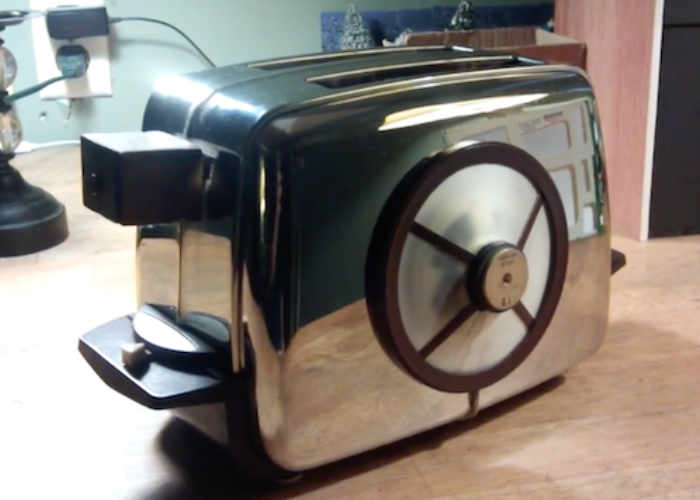 Fans of the iconic Red Dwarf TV series that was aired in the UK between 1988 and 1993 on the BBC and starred Dave Lister, played by Craig Charles, The Cat, played by Danny John-Jules, Arnold Judas Rimmer, played by Chris Barrie and Kryten played by Robert Llewellyn.

Are sure to enjoy this new Arduino build which has been created by YouTuber “slider2732” who has transformed a toaster into a talkie toaster from the series. Check out the video below to learn more about the build process which uses a couple of Arduino microcontrollers.

The Arduino code uses the TMRpcm library and is a simple case of responding to the PIR sensor going High or Low. The samples are loaded from the SD card.

The front grill area has the speaker underneath, with 2 white 5mm LED’s that are connected to the Pin 9 output from the Arduino. The former laptop screen material was cut out and then fitted. The main surround is from the lid of a sour cream tub, sprayed with a Krylon brown rattle can paint. The 4 legs are from a window blind, cut to the right sizes and similarly sprayed, then glued with Fix-All.

The samples were recorded in Audacity, Normalized and saved out as 11025Hz, 8 bit WAV’s, due to buffer constraints of the Arduino Pro-Mini. But, due to copyright probabilities, i’ll have to advise a similar route for anyone wishing to recreate another. It all worked out quite well and, bizarrely enough, when he says ‘Anyone like any toast ?” the toast racks vibrate LOL