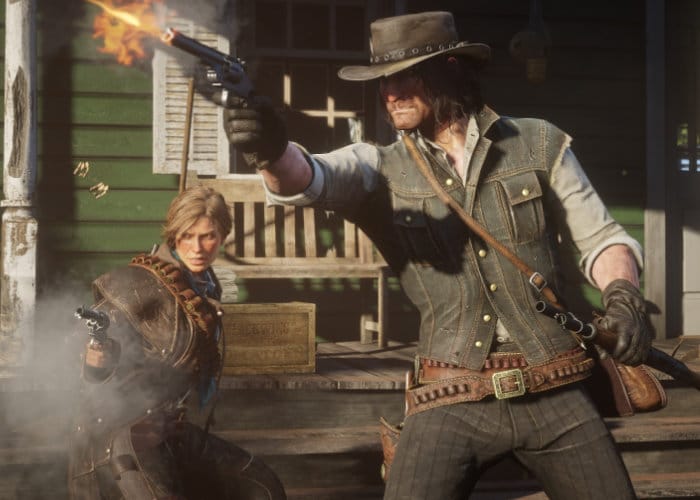 If like me you can’t wait to start playing the highly anticipated sequel Red Dead Redemption 2 and enjoying the new gameplay trailer released earlier today. You may be interested in a list of tips and features revealed by Sid Shuman on the PlayStation blog today to help you get started and learn more about the cowboy adventure game before its launch.

Red Dead Redemption 2 will be launching on both the PlayStation 4 and Xbox One consoles later this month on October 26th, 2018. The game is now available to preorder and offers a number of bonuses depending on your budget.

“You play as Arthur Morgan, member of the infamous Van der Linde outlaw gang. Following a bloody robbery in the Western town of Blackwater that left a trail of dead, the gang is chased by the law east into the Grizzly Mountains. The game picks up as the gang fights to survive the elements in a brutally cold winter.

Lead by the philosopher-outlaw Dutch van der Linde, this gang of hellraisers is 23 members strong. Doing your part for the gang will raise morale and change the way gang members respond to you.Talk to fellow members for leads on new money-making activities for the gang, or roll up your sleeves and chop some wood or head out to hunt wild game. Alternatively, just pour yourself a cup of joe and listen to some stories. Cough up some of your hard-earned cash for the camp’s donation box to fund future camp upgrades, like fast travel.”

The features and useful tips to get you started in the cowboy role-playing game created by Rockstar Games include :

– The HDR and volumetric lighting
– There are multiple camera settings
– You can customise the in-game HUD
– Weapons include a knife, revolver, repeater, lever-action rifle, and a classic bow and arrow. You can also earn the ability to dual-wield as you move through the story.
– Fire a warning shot to get attention
– Everything you carry is independently rendered. The impressive animation carries over to your horse’s reins, saddle, bags and more.
– Expect wide environmental diversity. The game seamlessly transitions between wide outdoor vistas into detail-rich interiors, a technical achievement rarely seen.
– Small talk can lead to outsized consequences. You never know what reaction you’ll get.
– Some towns keep secrets. Not every shopkeeper is running an honest business. Some stores have an illicit business on the side
– You can behave honourably or dishonourably
– You can cook and craft by the campfire
– The wildlife is diverse and unpredictable and creatures engage with each other using the games AI.
– Hunt Legendary Animals for special outfits
– Your horse is your partner, but you’ll need to earn its trust. Horses aren’t treated as expendable vehicles here, but as living, breathing creatures with individual temperaments.
– Town gun shops sell a variety of weapons and gear for the seasoned traveller, from new firepower (revolvers, repeaters, rifles, and shotguns) to performance-boosting accessories like gun belts and bandoliers.
– You can bathe, shave, eat, drink, and more
– The soundtrack is dynamic
– It’s a cross-studio initiative : Every studio associated with Rockstar Games is pitching in to help create the massive world of Red Dead Redemption 2, which Rockstar sees as a continuation and extension of the vision first laid out in Grand Theft Auto 3 all those years ago.
– Pick up your hat with the Square button : A fun detail here that’ll come in handy sooner than you think.
– Twirl your guns for extra style : Just double tap L1 to draw and holster your guns with a twirl and a flourish.