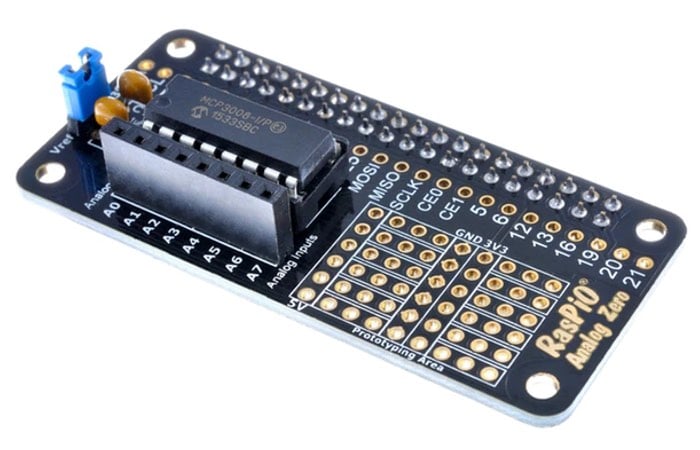 Alex Eames from RasPi.TV has been at it once again creating another awesome add-on for the Raspberry Pi and has launched his fifth Kickstarter campaign, to provide a small add-on board that is compatible with any Raspberry Pi mini PC and allows users to easily read 8 analog sensors simultaneously.

Aptly named the RasPiO Analog Zero, Alex has launched a quick 7 day Kickstarter campaign to raise the £2,048 he requires to take the concept into production. Check out the video below to learn more about this new Raspberry Pi add-on.

Alex explains a little more about the inspiration behind the RasPiO Analog Zero and its features and functionality.

Read analog sensors with GPIO Zero. Make a weather station/ voltmeter/ digital thermometer. Fits any Raspberry Pi. Perfect for the Zero. It fits straight onto any 40-pin Raspberry Pi. You can even use it with an adaptor on the older 26-pin Pis, but it’s a perfect match for the Pi Zero. It has a 54-point prototyping area – with plenty of power and ground connections – where you can put additional components.

As usual with RasPiO products, there will be some very clear and easy-to-follow instructions to get you started and show you how to use it. The better this campaign does, the easier it is to justify spending more time on these to make them really outstanding. GPIO Zero is now a part of the standard Raspbian distribution, so you won’t even have to install any software to get RasPiO Analog Zero working. This board also works with other GPIO libraries e.g. RPi.GPIO

For more information on the new RasPiO Analog Zero board jump over to the Kickstarter website for details and to make a pledge from just £7 by following the link below. If you enjoy building Pi projects you might be interested in our comprehensive list of Raspberry Pi displays, HATS and small screens as well.