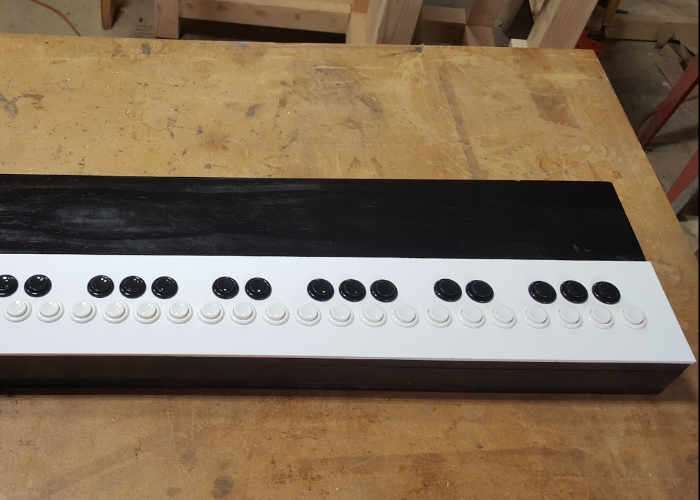 Brian ’24 Hour Engineer’ McEvoy has used the awesome Raspberry Pi mini PC to create a rugged piano style instrument which he has donated to his aunt and uncle’s care centre which looks after children with learning and developmental disabilities such as autism and Down syndrome.

Watch the video below to learn more about this rugged instrument which is being created using the smallest Raspberry Pi in the range together with arcade buttons and a homebrew resistor board.

The Tough Pi-ano saw good progress over the last couple weeks. An adapter board was built with neat resistors. This was the answer to the first adapter board which didn’t have any resistors and some had to be added after the board was already constructed. The picture below shows the neat resistor alignment. After a board was made with a repeatable pattern for the resistors two more boards were made and wired. All three boards were given long wires so they would be guaranteed to reach the arcade buttons at which point they would be trimmed.

Switches which were ordered at the beginning of this project finally arrived after international shipping. Stocked switches were swapped out on the first octave which was already in place. Every plastic button was installed, every switch was attached to a button, all the wires were trimmed, crimped, and connected to the adapter boards. 48 switches with two crimped wires each. The common wires were tied together for each octave to make the wiring simpler.

For more information on the new Raspberry Pi Zero Tough Pi-ano jump over to the official 24 Hour Engineer website for details by following the link below.

If you enjoy building Pi projects you might be interested in our comprehensive list of Raspberry Pi displays, HATS and small screens. If you are interested in building Arduino projects these may provide inspiration for your next project.