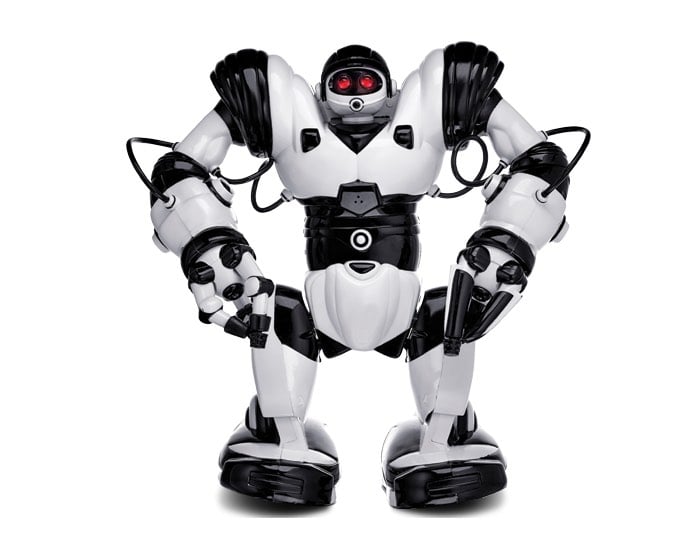 Carl Monk has published details of an awesome new project he has undertaken over the past few months, during which he has installed a $5 Raspberry Pi Zero mini PC into the body of a broken Robosapien Robot which he picked up from a charity shop.

Bringing it back to life with a wealth of new and enhanced features. Check out the video below to see a demonstration of the upgraded Robosapien which is now controlled using Python and the Raspberry Pi Zero mini PC.

Carl explains more about the project and how the Raspberry Pi Zero installation was accomplished.

I had previously seen how to hack these by using an IR transmitter and LIRC, but this meant externally mounting the hardware and I wanted this to be a more subtle hack. It took me a while, but I finally got round to working out how to hack it. There were two possible approaches

– Tap into the Infra-red signal line and fake the remote control
– Completely replace the main circuit board and control the motors and sensors directly.

I opted for the first option as it is less of a hardware headache. Option 2 would require handling 7 motors with 4 h-bridges, along with a number of switches to detect maximum movement as well as “bumps” on feet and fingers, so that’s a project for another day!

My goal was to embed the Pi, and if possible power it from the 4xD cells in the robots’ feet. These provide 6v for the motors and 3.3v for the control board and LEDs. Initially I tried to step up the 3.3v to 5v but underestimated the low power (about 100mA) the 3.3v provides. Instead I used a 6v to 5v step down (AMS1117 from eBay).

For full instructions and details of converting your very own Robosapien into a Pi powered robot jump over to the official For Toffee website via the link below. Great job Carl! If you enjoy building Pi projects you might be interested in our comprehensive list of Raspberry Pi displays, HATS and small screens.