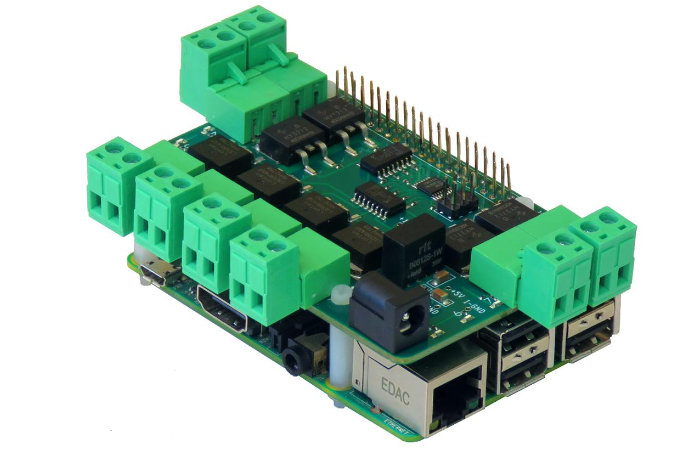 Sequent Microsystems has created a new solid-state power driver that can be used with the Raspberry Pi and other single board computers and microcontrollers. Designed for the industrial automation market, where reliability is critical, 8-MOSFET can drive four high-current loads (24 VDC at 10 A) and four high-voltage loads (240 VDC at 2 A). At the same time, its price tag brings it within reach of anyone who appreciates performance and reliability. Up to eight cards can be stacked on top of a single Raspberry Pi, giving your Pi the ability to drive up to 64 loads. And, because 8-MOSFET only occupies the I²C interface, you’ll still have 24 GPIO pins to use for other applications.

“When looking to drive high loads with a microprocessor, hardware designers typically turn to relays, in part because relatively inexpensive relays are still quite reliable under most circumstances. While they tend to perform well under AC loads, however, they fall short when faced with high DC voltages, fast switching times, and endurance requirements. Which is where 8-MOSFET comes in.”

Features and specifications of the solid-state power driver

To learn more about the 8-MOSFET by Sequent Microsystems and for full purchasing options with prices starting from just $40 jump over to the official Crowd Supply product page by following the link below.