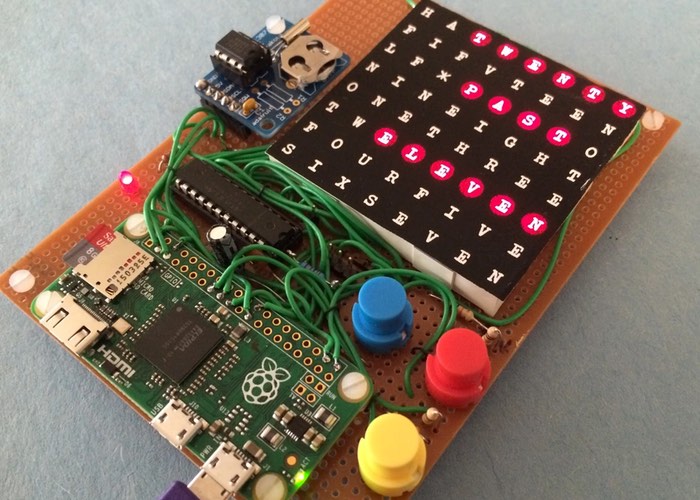 Raspberry Pi enthusiasts that are looking for a project to keep them busy over a weekend may be interested in a new Raspberry Pi powered word clock that has been created by David Saul.

The Tempus Fugit WordClock as you can see from the image above is powered by a Raspberry Pi Zero but can also be powered by an Arduino Nano development board if preferred.

Watch the video below to learn more about this Raspberry Pi project which is taken to Kickstarter to raise the £2,000 it needs to go into small scale production.

The Tempus Fugit is a simple WordClock interface board for your Raspberry Pi Zero or Arduino Nano. The time in words is spelt out on an 8 by 8 letter matrix, with accuracy maintained using an on-board battery backed real time clock chip.

Interested, but having trouble getting a Pi Zero – then start with a Arduino Nano. It is easy to change this out later on, just unplug the Nano and plug in your Pi Zero. You can also use the Tempus Fugit with any of the other Raspberry Pi computers – there is more detail on this in the following section.

For more information on the new Tempus Fugit WordClock jump over to the Kickstarter website for details via the link below and make a pledge from just £7. If you found this article interesting you might also be interested in this list of awesome Raspberry Pi Zero projects we have put together.