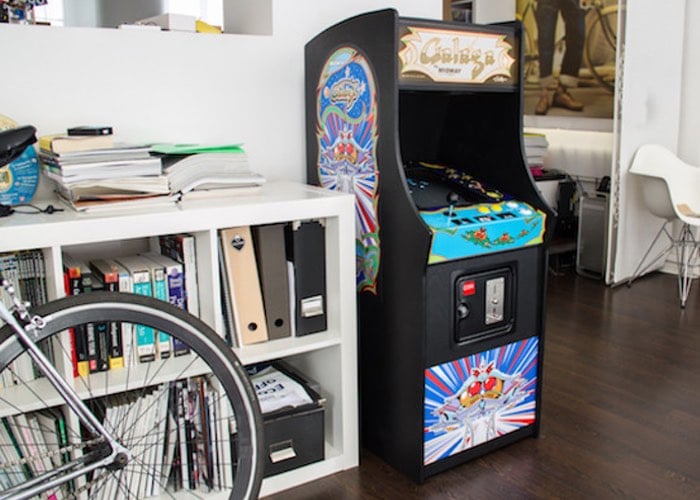 If you have ever wanted your very own arcade cabinet, you are sure to be interested in this new project which is being published, providing everything you need to create your very own powered by the awesome Raspberry Pi mini PC.

Check out the videos below to learn more about the project and the build process which has been on the creators to do list for quite some time and can now be ticked off with pride. Top job!

The creator of the arcade cabinet, Alex Weber explains more :

Over the last years I acquired a couple of tools and now I have a somewhat decent workshop. The Raspi 3 is there and quite powerful enough to run MAME. I even saved an old TV from the dumpster and had it sitting on the shelves for ages. So it was like now or never.

Galaga was always one of my top-5 most loved arcade games. I searched around for inspiration and maybe plans I could use. I found a quite promising one here and also dug up the artworks as SVGs. Looking at the plans and at the very steep stairs to my workshop in the basement, I decided to scale everything down to 4/5th of the original size. Smaller and lighter, easier to handle.

The cabinet is built to 4/5 scale. This is a great size because he gets the stability and feel of a full-size machine, but it’s much easier to move it around. As you might expect, there’s Pi in the cabinet. The display is an old TV that [Alex] found in a Dumpster. And although it works great, it would go into standby instead of powering off along with everything else. To get around this, [Alex] built an automatic remote control with an IR LED and an Arduino Diecimila. After a five-second wait, it sends the power-on code to the TV and switches the input. The TV is supposed to be in portrait mode for Galaga, but this proved to be a challenge. Changing the orientation at the Pi level resulted in poor performance and choppy sound, so he changed it at the game execution level.