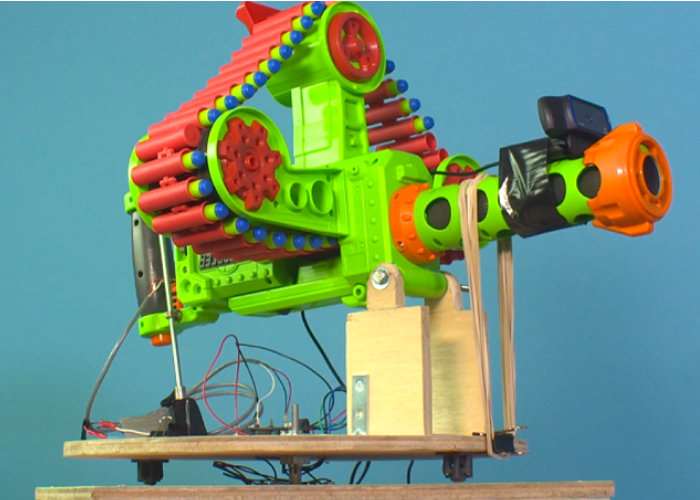 Raspberry Pi enthusiasts that might need to upgrade their Pi powered Nerf Sentry Gun, may be interested in a new platform called n.io. Details are still restricted on exactly how n.io functions although the platform seems to contain an infrastructure for both server side and client side computing.

Watch the video below to learn more about the nio Nerf gun sentry which is equipped with a web camera that provides a video feed to the Raspberry Pi mini PC which is then in itself transmitted to a MacBook via the n.io platform.

The nerds on the net can’t seem to get enough of the automated nerf gun turret with facial recognition! So, we grabbed in-house n.io nerd Tyler to break it down one more time. From the materials you probably already have, to the hardware you’re gonna need, but most importantly – the software that makes it happen!

The build uses a Nerf gun mounted on a motorized platform, which is connected to a Raspberry Pi running the n.io software. OpenCV facial tracking on the MacBook is used to look for targets (and even look for specific people), and then aiming commands are sent back to the Raspberry Pi. The Nerf gun is pointed at the target, and starts firing!