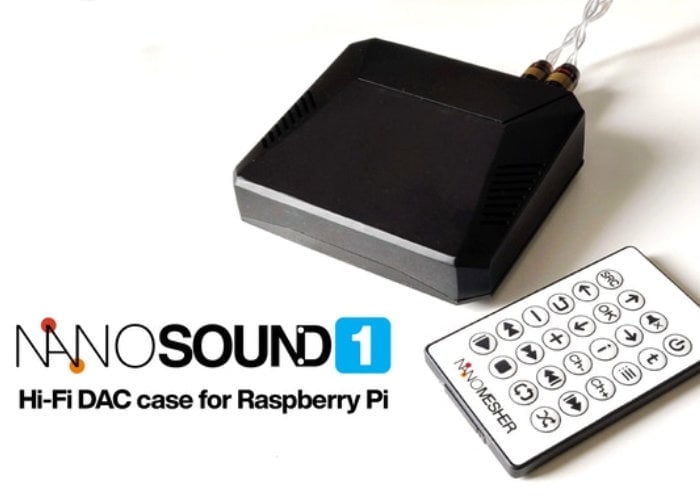 Raspberry Pi case makers and peripheral manufacturers Argon X NanoSound have unveiled their latest Raspberry Pi case in the form of the NanoSound ONE. Specifically created to make the process of creating a Raspberry Pi Hi-Fi DAC system even easier. Earlybird pledges are available from roughly £55 offering a 15% discount off the recommended retail price.

The aluminium Raspberry Pi casetransforms the mini PC into a 92khz 24bit Hi-Res network audio streamer or media PC with Hi-Fi DAC and supports the latest Raspberry Pi 4 mini PC with all its power. Watch the demonstration video below to learn more about the Raspberry Pi case which is launched via Kickstarter this week and has already blasted past its required pledge goal with steel 43 days remaining on its campaign.

“Powered by NanoSound by Nanomesher, the NanoSound One’s audio DAC is built specifically to fit perfectly within the Argon ONE Aluminium enclosure for best cooling performance which Raspberry Pi 4 demands. Nanosound One Player is controllable via App, Web or via infrared remote. It runs on the open source audio player OS – Volumio (It can also support other OS). Volumio is the audiophile music player designed and fine-tuned for high quality music playback. Free and Open Source Forever.”

“NanoSound One is a Raspberry Pi 4 aluminium closure with a Hi-Fi DAC built in. It turns your Raspberry pi 4 into a ready-to-play High Resolution Network Music Player which can play any audio files including MP3, FLAC, WAV, AAC, FLAC, DSD, Audio CD and many more. It has an onboard Hi-Fi DAC (Digital Analog Converter) designed for Audiophiles and also supports a large number of music services including Spotify, Web Radio, Qobuz and Tidal.”

Applications for the NanoSound ONE Raspberry Pi Hi-Fi DAC case include: