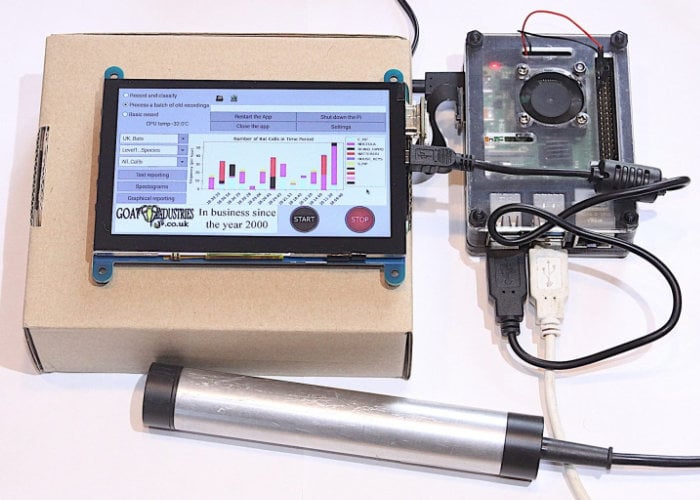 Raspberry Pi enthusiasts interested in creating an ultrasonic bat detector may be interested in a project published by Tegwyn Twmffat to the Design Spark website earlier this year. A Raspberry Pi mini PC has been combined with a UltraMic 384 and full instructions on how to build your very own Raspberry Pi bat detector have been kindly published. The Ultramic384K BLE is a high quality, professional digital device that can work as either: • a USB ultrasonic microphone connected to a PC/Tablet/SmartPhone or a smart autonomous recorder, when a micro SD card is inserted.

“Although auto-classification of bats had been done before, I thought it would be fun to have a go myself. After a few false starts and some communication on this, particularly friendly, Facebook group: Bat Call Sound Analysis Workshop I settled on a solution using Random Forest and a set of feature extraction algorithms from Bioacoustics. After following the Bioacoustics tutorial I managed to get some basic training and deployment scripts up and running in the R language, despite never having used it before. I did, however, have to go back more recently and work out how to use it properly to create .csv files for producing into graphs!”

“Finding data for the classifier was not as easy as we might expect. In theory, there should exist a number of ‘citizen science’ databases crammed full of audio recordings of the bats of the UK and northern Europe, but, for some reason, they’ve all been made inaccessible to the general public. Fortunately, I found 6 species in my back yard and, with the help of a few other enthusiasts, I cobbled together a data-set of 9 of the 17 species found in the UK for testing. I also added recordings of rattling my own house keys to help test the system when no bats were available.”