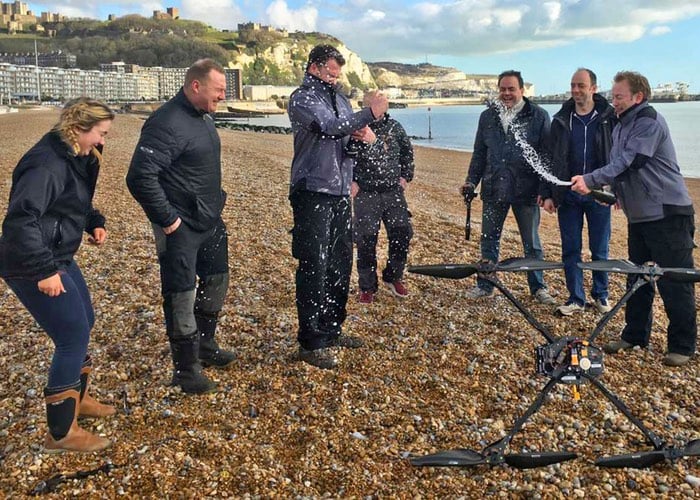 Ocuair British commercial drone company has set a new world record by being the first quadcopter to fly across The English Channel, completing the 35 km in just 72 minutes.

The UK team of drone experts completed their bid to be the first people in history to fly a drone across the English Channel earlier this week and have also recorded the longest single official flight of a quad copter in the world.

Richard Gill leads the team and explained when asked why :

I wanted to do something to stand out and show what this technology is capable of, companies like Amazon, with their Prime Air service have seen the commercial potential of drones. This attempt pushes the boundaries of what is technically possible.

The Ocuair reports more about the flight and at the new world record.

The flight took place on the morning of the 16th of February 2016, on an unusually sunny and calm morning Richard and his team set off for a beach near Wissant in Northern France. After some trouble getting close to the beach he finally got the drone in the air and began the flight back to the 35 kilometer flight back to the UK.

Although scheduled to take about 80-90 minutes the journey wasn’t easy. The English Channel is the busiest shipping lane in the world and the drone and the boat had to dodge between two large vessels. With such tight margins Richard couldn’t afford to make large deviations from the most direct route.

The flight was going well as he passed the point of no return, 17km, from here the distance to the UK was shorter than returning to the original launch position so there was no escape plan. At 23km something strange happened. The drone suddenly lurched to the left and Richard had to disable the GPS guidance and take manual control of the flight for the final 20 minutes. Flying without GPS assistance was extremely challenging.

For more information on the new quadcopter world record jump over to the Ocuair website for details via the link below.