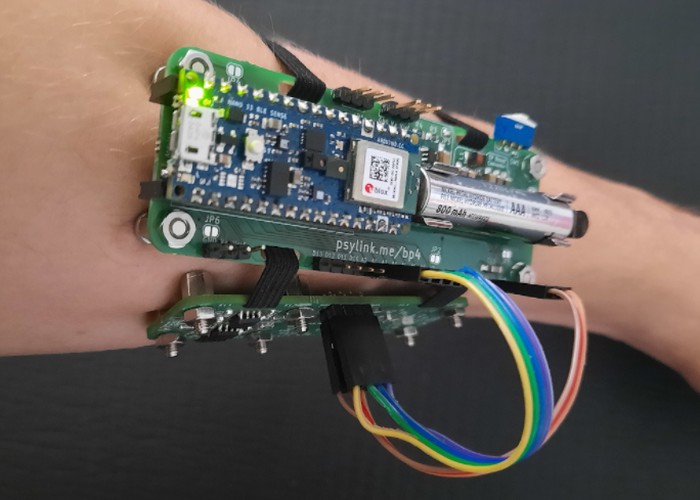 If you are interested in building your very own non-invasive EMG neural interface you may be interested in new project called the PsyLink, built using the Nano 33 BLE Sense board. The Nano 33 development board provides Bluetooth connectivity and a wealth of ADC pin connections some of which are connected to aluminum foil pads used to detect minute electrical impulses from the wearers muscles when the contract, sending triggers to the machine learning model within the interface. Check out the video below to see the PsyLink non-invasive EMG neural interface created by maker and developer “Hut” in action.

“PsyLink, is where I attempt to build an AI-powered myoelectric neural interface, on a budget. It predicts your intentions by scanning your muscle signals and essentially acts like a keyboard. Why do any of this? Neural interfaces are the future. I want them to be open and safe, in the user’s control, not the other way around. In early 2021, the biggest players in this field required invasive surgery and/or had poor incentives.

Some companies invited researchers to build applications for their devices, only to sell them out later to Facebook and Google, while pulling their hardware from the market, leaving the users dry. So I thought, why not build one myself and open-source it? Can’t be that hard, it’s just bits’n’wires, right?”

“We don’t have to drill a hole into skull to get access to your nerve signals. Muscles naturally amplify them, allowing us to easily read them through skin, and use them for useful things like controlling a computer or an artificial limb. You could argue that we use our nerves/muscles to control keyboards already (and pretty much anything else). And for the time being, there are clearly superior human input devices.”

“For more information on the PsyLink neural interface and the design process behind it jump over to the official PsyLink blog by following the link below.”