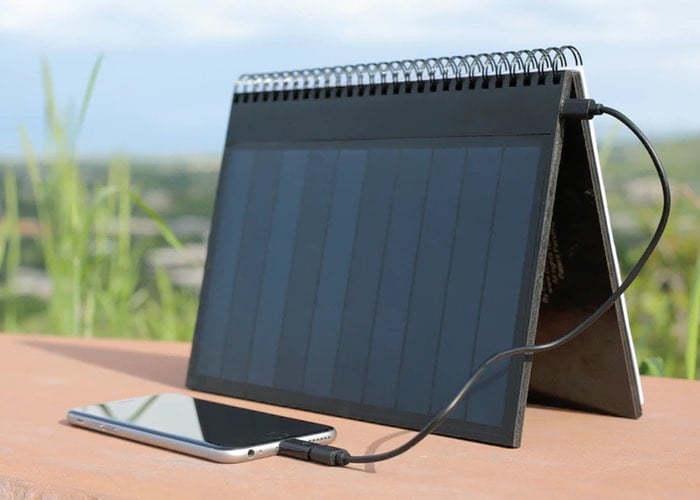 Solar Shtick has unveiled a powerful solar charging system that they have created called the PowerBook, which is capable of charging your mobile device as fast as your wall charger, as long as sunlight is available says Shtick.

The PowerBook has been fitted with the “world’s most efficient solar cells” and is capable of charging an iPhone 6 from flat to full in just 2.5 hours. The notebook as the name suggests is also available to capture sketches, notes and thoughts as well as providing a way to angle the panel directly at the sun when needed.

Watch the video below to learn more about the inspiration and technology used in the PowerBook solar charger which is taken to Kickstarter to raise the $15,000 it requires to go into production over the next 30 days.

We all grew up with them. They’ve been home to our sketches and thoughts since we were old enough to scribble with a crayon. Years and years have gone by and this hasn’t changed – the notebook is still a treasured, every-day part of our lives. What has changed is the quantity of devices that we use every day and the need to keep them charged… Introducing the first notebook to seamlessly integrate solar charging for usb devices.

Sunpower Solar Cells max out at 24% efficiency making them the best performing solar cells on the market. This means they are able to extract more power from the same amount of sunlight – resulting in faster, more efficient charging. When a cloud blocks the sun, the Powerbook will automatically disconnect from your device. Once the cloud passes and sunlight hit the panels again, the Powerbook will automatically reconnect to your device and continue charging it.

It’s critical that direct sunlight is able to reach the solar panels.Thanks to the wire binding design, the solar panel can rotate a full 360° to ALWAYS be positioned for optimal solar exposure. Stand it up at different angles or lay it flat. Optimum solar exposure = 90° perpendicular to sun rays.

For more information on the new PowerBook solar charging solution jump over to the Kickstarter website for details and to make a pledge from $60 for super early bird backers, by following the link below.