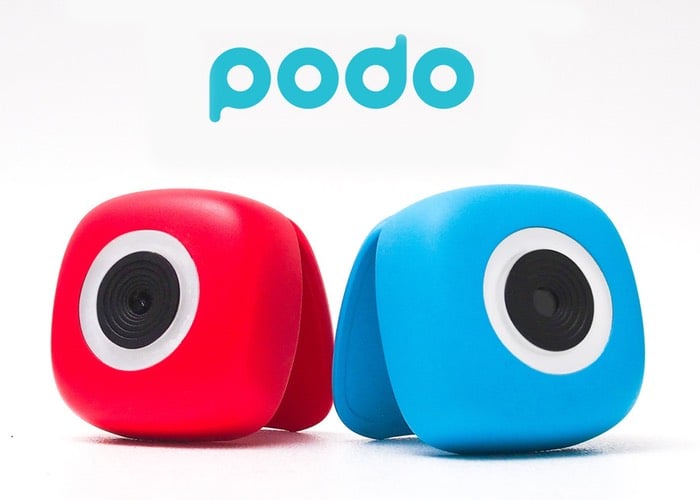 Smartphone photographers that would like to get a different angle on their selfie or group shots may be interested in a new pocket sized Bluetooth camera called the Podo which can be stuck to almost any surface.

The Podo Bluetooth camera connects to your smartphone using a companion application that is supported by both Android and iOS operating systems, enabling you to click and share your photos instantly.

Podo allows you to view the image you are going to take on your smartphone screen and is equipped with an 8 megapixel sensor that is also capable of recording 720p video.

The Podo Bluetooth camera has this week launched over on the Kickstarter crowdfunding website and has already nearly raised its $50,000 pledge goal with still 48 days remaining on its campaign. Watch the video below to learn more about how the Podo camera functions. Its creators Podo Labs explain a little more about the cameras designed and features.

“Podo sticks to walls, windows, poles (basically any solid surface) using a re-washable, re-stickable pad. We added a strong magnet in there too.

Podo shoots photo, video, time-lapse, and more. You can see a live preview of the shot before you take it, so it always turns out the way you want. Podo shares what you capture with ease because everything transfers wirelessly to your phone. From there you can edit, share, or do whatever it is you usually do.

The Podo App is free for iOS and Android and controls every aspect of the Podo camera. The main screen consists of a settings bar, preview screen, mode selection bar, and shutter area. After making sure the shot looks exactly the way you want, tap the shutter, or drag and release to start a timer.”

For more information on the new Podo Bluetooth camera jump over to the Kickstarter website for details via the link below and make a pledge from $79 to be one of the very first to own one.