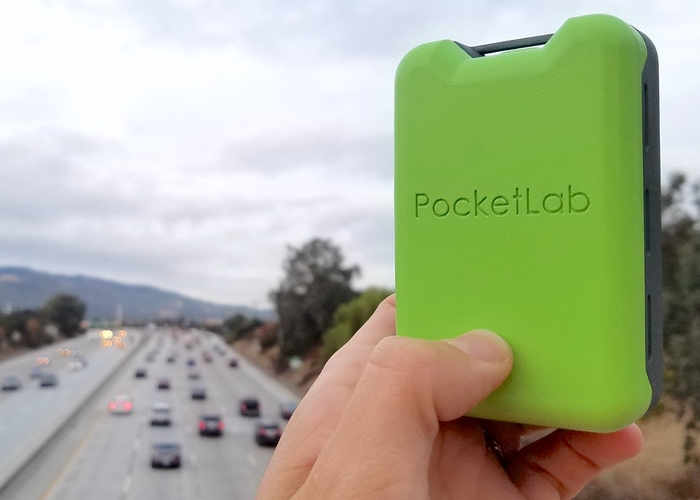 Clifton Roozeboom has designed and developed a new pocket-sized air pollution monitor which is capable of measuring pollution and emissions in your environment. The aptly named PocketLab Air measures exactly what’s in your air and allows you to carry out your own research on climate change, air pollution and the state of your local environment. Equipped with state-of-the-art sensors that measure CO2, ozone and particulates and is easy-to-use. Watch the demonstration video below to learn more about the pocket pollution monitor which is launched via Kickstarter this week and has already raised the $25,000 it requires to go into production. Pledges are available for earlybird backers from $198 with delivery expected to take place during October 2018.

The developers of PocketLab Air explain more about its inspiration, design and monitoring features.

Measure carbon dioxide, ozone, particulate matter, and weather conditions. Investigate how air quality is affected by soot, dust smoke, and other fine particles from vehicles, wildfires, factories, and other sources. PocketLab Air can compute the Air Quality Index (AQI) score by measuring particles sizes of 1 um, 2.5 um, and 10 um.  Store up to 30,000 data points on the internal memory and then download the data to your phone, tablet, or computer. Simultaneously measure all the sensor parameters: carbon dioxide, ozone, particulate matter, temperature, humidity, barometric pressure, and light. Wirelessly transmit data in real-time using Bluetooth 4.0. PocketLab Air can transmit up to 250 feet when in direct line of sight.