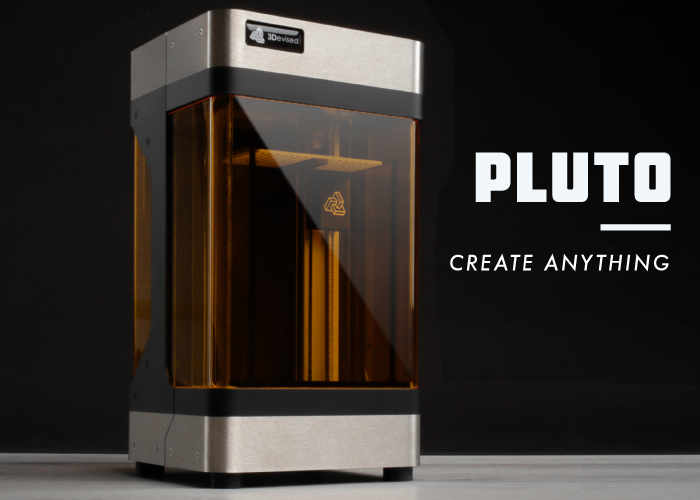 The team at 3Devised has developed a new professional 3D printer called the Pluto, that they say is the world’s smallest high-quality desktop 3D printer. Pluto has now left its prototype stage of development and is currently being manufactured in small production runs. The company is hoping to increase the size of the production runs and has taken to Kickstarter this week to raise the $50,000 it requires to push the 3D printer to market. Watch the demonstration video below to learn more about the Pluto 3D printer and its features.

The development team behind the Pluto 3D printer explain more about its inspiration, design and features.

We simply love high-quality 3D printing! Unfortunately SLA machines (even desktop ones) are complicated, bulky and very expensive. We have been working to change this since 2015.  We designed PLUTO to be easy to use and compact, really fitting on anybody’s desktop. From the first moment we kept in mind that PLUTO should remain affordable for everyone. PLUTO is not just a prototype anymore. We have manufactured and fully assembled 10 pre-production units to fine-tune our parts procurement and manufacturing processes. Everybody wants to jump right into printing and nobody wants to spend half a day setting up a complicated machine. You only need to unbox PLUTO, plug in the power supply and fill the tank with the resin. After you launch 3Deviser the printer will be automatically detected and you are ready to go!

We also dislike unnecessary cables (we had enough of them during developing the first prototypes). PLUTO has a built-in WiFi module and it can connect to your existing network or create it’s own. 3Deviser automatically detects every PLUTO connected to the WiFi. We have used a lot of open source and free software during the development of PLUTO and we would like to give back something in return. 3Deviser, PLUTO’s firmwares and it’s schematics will be published on GitHub. While PLUTO and it’s softwares are quite capable in their current state we think that opening PLUTO up will enable it to do much more than we alone could provide. We believe that everybody should be free to tinker with their 3D printers.

To learn more about Pluto and its full specifications as well as all available pledges jump over to the official Kickstarter campaign page by following the link below.