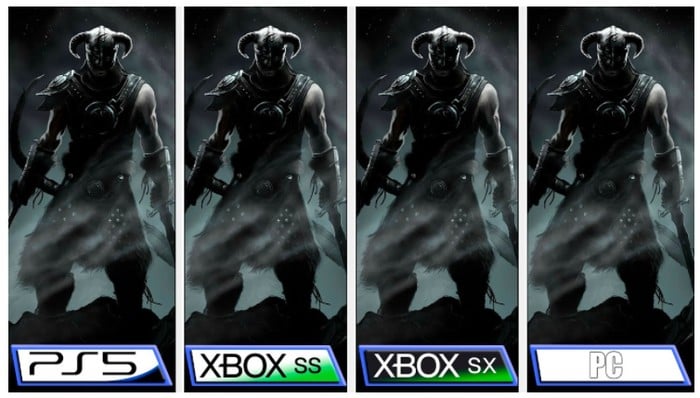 If you haven’t yet upgraded or downloaded the latest Skyrim Anniversary Edition game recently released by Bethesda, you may be interested in this excellent PS vs Xbox vs PC graphics comparison video created by the team over at the ElAnalistaDeBits YouTube channel. Providing a great overview of what you can expect from the performance and graphics on all major platforms including the latest PlayStation 5 and Xbox Series X|S consoles.

The Anniversary Edition includes the core game, pre-existing and new Creation Club content, plus all three official add-ons: Dawnguard, Hearthfire, and Dragonborn and is free to download if you already own the Skyrim Special Edition version of the game.

– The nextgen versions can be obtained for free with the Special Edition (although it does not include the DLCs).
– In the same areas, Xbox Series S/X have shown dynamic resolution, while PS5 has kept the native 2160p.
– Series X shows a greater draw distance than PS5 and even with respect to PC in some zones.
– PC continues to display higher quality shadows and anisotropic filtering.
– Textures have the same quality on all platforms.
– Nextgen consoles should be able to run this game smoothly at the highest settings. A little more optimization would have been great.
– Not the best nextgen patch I have found, but the 60fps is appreciated.

“Winner of more than 200 Game of the Year Awards, The Elder Scrolls V: Skyrim celebrates 10 years of adventuring in stunning detail. The Anniversary Edition includes a decade worth of content: the critically acclaimed core game and add-ons of Skyrim Special Edition, plus pre-existing and new content from Creation Club including quests, dungeons, bosses, weapons, spells, and more.”