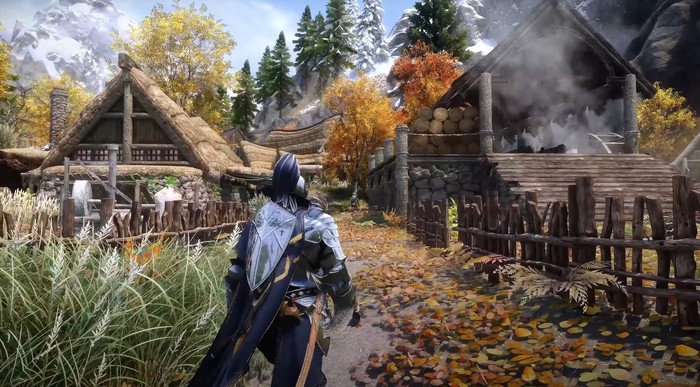 Earlier this week Bethesda launched a new addition of its Elder Scrolls Skyrim game celebrating its 10th anniversary since release back in 2021. Thanks to the existence of a wonderful array of mods for the game, Skyrim is still a shooter the popular game and can be tweaked to exact preferences with new content available from creators and Bethesda being added all the time. The 10th Anniversary Edition of Skyrim includes the core game, pre-existing and new Creation Club content, plus all three official add-ons: Dawnguard, Hearthfire, and Dragonborn.

The latest update from Bethesda adds a new survival mode together with a fishing mechanic allowing you to catch a wide variety of different species that you can use to cook and make exotic potions. YouTube channel Digital Dreams has released a new 4K Skyrim 10 Year Anniversary gameplay video this week providing a glimpse at what can be accomplished using the huge array of mods available for Skyrim. Check out the video below to see the ultramodern version of Skyrim which uses 1,300 mods to add a wealth of detail to the game.

Just for reference the Skyrim game was run on a PC powered by a Ryzen 9 3900x 4,5Ghz CPU supported by 32 GB of Corsair Vengeance memory and a ASUS TUF RTX 3090 graphics card.

“As The Elder Scrolls V: Skyrim celebrates its 10th anniversary, we’re commemorating a decade of adventures, creativity and passion that have come from you, the fans! Winner of more than 200 Game of the Year Awards, The Elder Scrolls V: Skyrim celebrates 10 years of adventuring in stunning detail. The Anniversary Edition includes a decade worth of content: the critically acclaimed core game and add-ons of Skyrim Special Edition, plus pre-existing and new content from Creation Club including quests, dungeons, bosses, weapons, spells, and more.”

“EPIC FANTASY REBORN – Skyrim reimagines and revolutionizes the open-world fantasy epic, bringing to life a complete virtual world open for you to explore any way you choose.

LIVE ANOTHER LIFE, IN ANOTHER WORLD – Play any type of character you can imagine, and do whatever you want; the legendary freedom of choice, storytelling, and adventure of The Elder Scrolls is realized like never before.

YOU ARE WHAT YOU PLAY – Choose from hundreds of weapons, spells, and abilities. The new character system allows you to play any way you want and define yourself through your actions.

BATTLE DRAGONS – Battle ancient dragons like you’ve never seen. As Dragonborn, learn their secrets and harness their power for yourself. “