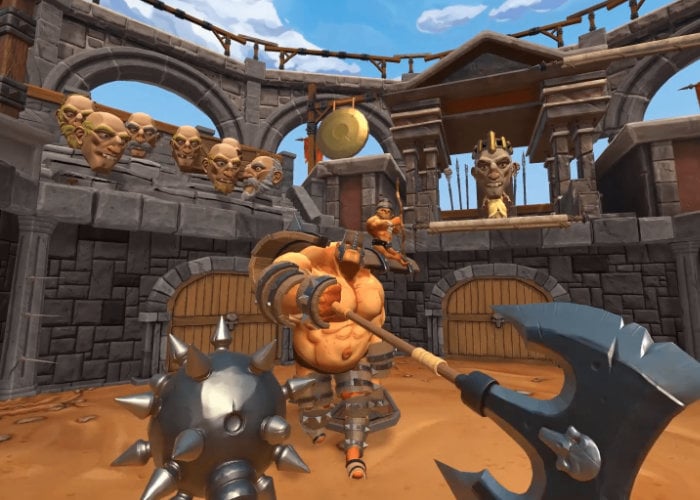 PlayStation VR gamers cannot only enjoy the new virtual reality survival game and shooter Walking Dead: Saints & Sinners, with its “groundbreaking physics-based VR combat”. But also the highly anticipated launch of GORN. Adone Kitching Producer at indie game developer Free Lives has taken to the official PlayStation blog this week to reveal more details about what you can expect from the arena style virtual reality combat game which has already been available via Steam for quite some time.

“Because VR brings the game world so much closer to the player, we realized we couldn’t rely on pre-baked animations. Instead, we felt that interactions — especially impacts — should resolve in natural and expected ways. In order to get that right, Gorn simulates every object in the arena — even the enemies — at all times.

For interactions to resolve naturally, we also needed to make sure that objects felt like they had weight. That’s no small feat in a VR game, where the player’s range of motion makes swinging and throwing things around all the more enjoyable. To create the sensation of weight, we added wobbliness to the weapons so that players can see the impact of gravity and various other forces on their shapes. Wobbly weapons have become a signature Gorn aesthetic, and we’re pretty happy about that.”

“While making Gorn, we also wanted to lean into the fact that motion controls make it possible for players to move in whatever way they please. When you add fully simulated objects to an unprecedented range of motion, it means that players can set up the most incredible hit combos and trick shots.

You can push the enemy shield out of the way to get a clear shot. You can catch his weapon mid-swing. You can pick up a defeated enemy to use as a shield against another’s arrows. You can pick up a severed arm to use as a weapon. If you’re fast enough, you can even catch an arrow mid-air and return to sender. We are still surprised by the creative combat styles that players come up with, and we love that about Gorn. It gives players the freedom to battle their enemies in weird and wonderful ways.”