The new PlayStation 4 gaming console unveiled by Sony last week, is still currently under development and as yet no images of what the PS4 console will look like have been released, however screenshots of the PlayStation 4 User Interface have.

In the gallery below you can see a number of PS4 user interface screenshots which have been released by 2ch Japan’s largest online bulletin board, which points to the Japanese site Game no Hanashi. 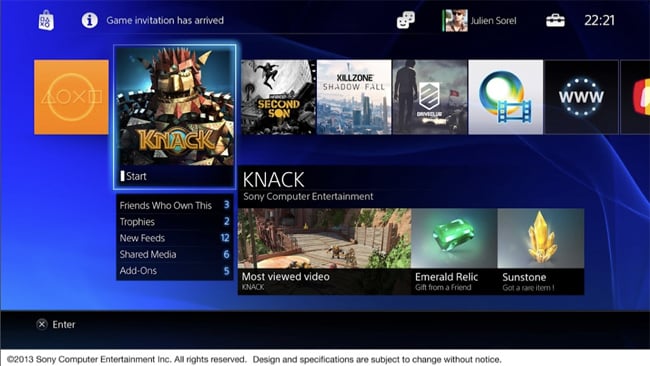 The Sony PlayStation 4 specs that we currently known and have been confirmed by Sony, reveal the new PlayStation 4 will come with a PlayStation 4 Eye camera in the box, and the PS4 console will be able to connect to smartphones and tablets as a secondary screen.

The new PS4 user interface screenshots reveal the look of the user home page, friends listings, trophies, feed, and shared media as well as add-on content.  Together with a profile page and a couple of details on how PS4 owners will share content with their friends.

The connection from PS4 console to your mobile devices will be made via a companion PlayStation application that will be available for a iOS and Android devices.

Sony also unveiled the new PS4 dual-shock controller and also revealed that gamers will b be able to view and stream gameplay to friends allowing you and them to watch the gameplay action even if you or they don’t own a copy of the game being played.

The new streaming service will be linked to UStream and Facebook, and Sony’s Gaikai technology will enable you to play streamed game demos directly from the PlayStation Store.

Another neat features of the new PS4 user interface includes the ability for the console to update and download games in the background when the console is off or not being used.

Unfortunately thought the look of the new PlayStation 4 gaming console has still yet to be decided by Sony, but has soon  as anything leaks or is revealed by Sony we will keep you updated.