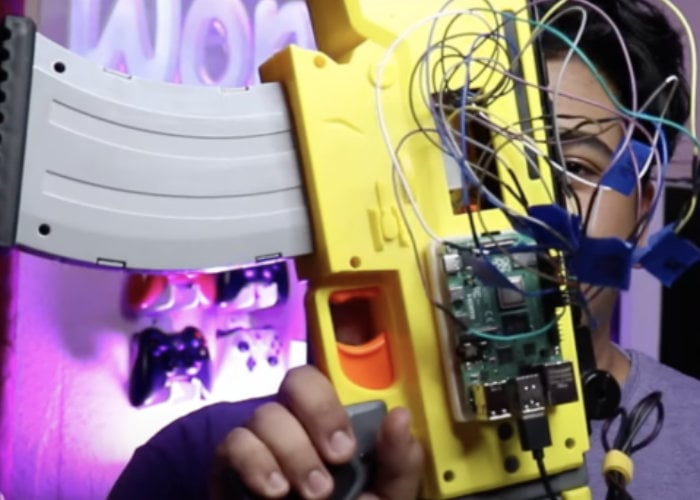 YouTuber Alfredo Sequeida has combined a Raspberry Pi mini PC and a Nerf gun to create a unique controller that he has used to play Call of Duty Warzone. Check out the video below to learn more about the project and the build from which movement is controlled by receiving accelerator data from an old Nexus 5 Android phone via ADB logcat which is logged using a custom app Sequeidamade on Android Studio with Kotlin. Awesome stuff!!

“Gameplay movement is controlled by getting accelerometer data via the command-line tool ADB logcat from an old Nexus 5 Android phone that’s mounted on the Nerf gun. The data is logged using a custom app Alfredo made on Android Studio.”

“I bought a Nerf gun and turned it into a controller to play Call of Duty Warzone (COD). The controller uses the trigger and other buttons already on the gun, but I also added extra buttons that I 3D printed to perform more in-game actions like moving, plating, and jumping. The whole thing is powered by a Raspberry Pi 4 and Python scripts that I wrote for both the client (Raspberry Pi) and the server (gaming pc). Movement is controlled by getting accelerator data from an old Nexus 5 Android phone via ADB logcat which is logged using a custom app I made on Android Studio with Kotlin.”