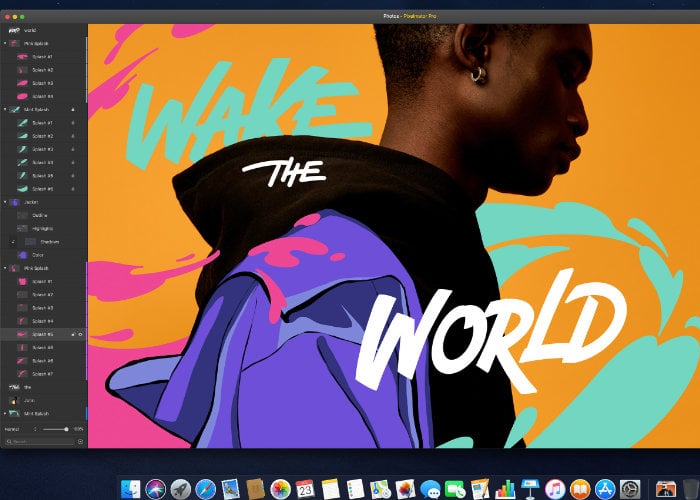 “Pixelmator Pro is a powerful, beautiful, and easy to use image editor. Featuring an elegant and streamlined single-window interface, it puts all the focus on the images you edit, rather than what’s around them. And with a design that is totally and completely Mac, it feels instantly familiar from the moment you first open the app. So image editing becomes simpler and more enjoyable than ever.”

New features in the Pixelmator Pro 1.4 Hummingbird update include :

Incredible Photos Extension
– The incredibly powerful new Photos extension lets you edit images using Pixelmator Pro without ever leaving the Photos app.
– Every Pixelmator Pro tool and feature is available in Photos.
– Save layers and other nondestructive changes directly to your Photos library and sync between computers via iCloud.
– Enjoy support for all Pixelmator Pro keyboard shortcuts in Photos.

New Zoom Tool and Improved Crop Tool
– Effortlessly zoom and scroll images with the brand new Zoom tool.
– Use the Navigator to move around large images with ease.
– Check out the updated Crop tool — it now has a Delete mode, redesigned presets, and the ability to crop to custom pixel sizes.
– Use the new Delete mode to permanently delete unwanted image areas after cropping.
– Crop presets have been moved to the Tool Options pane, freeing up more editing space for your image.
– Constrain crops to exact pixel sizes.
– Flip Vertically and Flip Horizontally commands are now available in the Crop tool.

Improvements
– You can now insert layered images — in PXD, PXM, SVG, or PSD format — right into existing Pixelmator Pro documents using drag and drop.
– Copying and pasting layered files from Finder or your desktop works, too.
– The Paint and Erase tools have been redesigned, moving presets into the Tool Options pane, highlighting individual brushes, and freeing up more editing space for your images.
– The Slice tool has also got itself a makeover, incorporating its presets into the Tool Options pane.
– The template chooser now includes a Devices category with iPhone, Mac, Apple Watch, and other screen sizes.
– Significantly improved performance when editing images with a large number of layers.
– The Pixelmator Pro file format has been optimized to reduce file sizes.
– Gradients and layer styles from the original Pixelmator can now be imported into Pixelmator Pro.
– Items in the Info bar are now double-clickable, so you can quickly change the size, color profile, color depth of your image or choose the Arrange tool.
– The Option-Command-F keyboard shortcut will now apply the Color Fill effect.
– The Control-H keyboard shortcut now toggles layer visibility.
– The Option-L keyboard shortcut now shows or hides the Layers sidebar.
– ML Fix has been renamed to ML and its appearance has been updated (to match Pixelmator Photo).
– A new Image menu is now available in the menu bar, containing commands like Image Size, Canvas Size, Color Depth, and more.
– When using the Repair or Clone tools, the Sample All Layers setting will now be disabled when a layer has effects, adjustments, or styles as this produces unexpected results.
– Pixelmator Pro presets in Automator will now update as soon as they are changed in Pixelmator Pro without having to quit the app.
– When exporting to PDF, you can change the color profile of the exported image in the Export dialog.