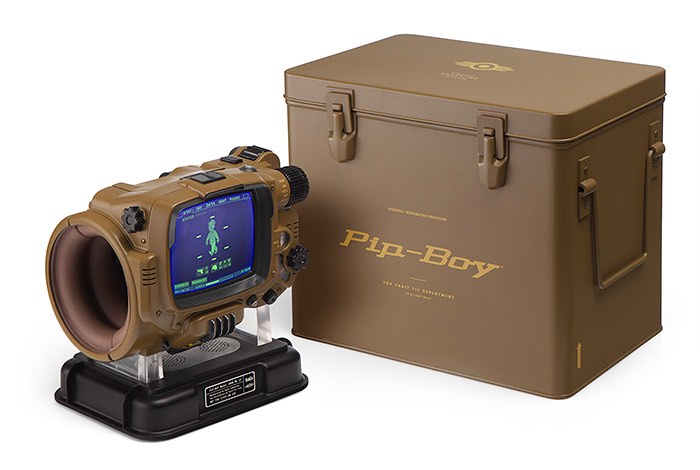 As well as unveiling a wealth of new gameplay trailers and new details about upcoming additions to the Fallout 4 game and the launch of the new Skyrim Special Edition.

Bethesda has also unviled the Pip-Boy Deluxe Bluetooth Edition set which provides a functioning Pip-Boy replica that pairs up with your Bluetooth phone or tablet similar vein to the previous released and highly sought after previous version.

The latest Pip-Boy Deluxe Bluetooth Edition comes complete with its own RobCo Industries stand that doubles as a charging base and speaker and will be available to purchase during November 2016 and is now available to pre-order for $350 plus shipping. Check out the video below to see what you can expect from this latest limited edition deluxe Bluetooth Edition Pip-Boy.

With all the hours you’ve spent playing Fallout, haven’t you earned a working Pip-Boy Model 3000 Mk IV replica? A faithful reproduction of the in-game item, this Pip-Boy: Deluxe Bluetooth® Edition is not a phone case for your arm. It’s even better. With an integrated screen and its own on-board software and hardware, this Pip-Boy pairs with your Bluetooth phone or tablet to give you access to your phone’s ability to take and place calls, as well as its contacts, SMS messages, and audio files. Even when not paired, the Pip-Boy: Deluxe Bluetooth Edition® can still be used as an alarm clock or a cosplay prop, displaying the Status, Special, and Perks screens from the game. Oh – and did we mention that most of the knobs, dials, and buttons actually work?

Designed to fit most human arms, the Pip-Boy: Deluxe Bluetooth Edition is lined with foam for a comfortable custom fit. Weighing in at just about 2 pounds, the Pip-Boy ensures you know won’t forget it’s there and ready to assist you, but it’s not uncomfortable. And there aren’t any nasty biometric seals on this one, we promise. The Pip-Boy: Deluxe Bluetooth Edition comes with a genuine RobCo Industries stand that doubles as a charging base and more powerful speaker option when the Pip-Boy is in place. The compartment on top opens to reveal a holotape that’s a USB drive. And it all ships in a Capsule-Case-inspired tin designated for Vault 111 deployment.

Specifications of the Pip-Boy Deluxe Bluetooth Edition include :