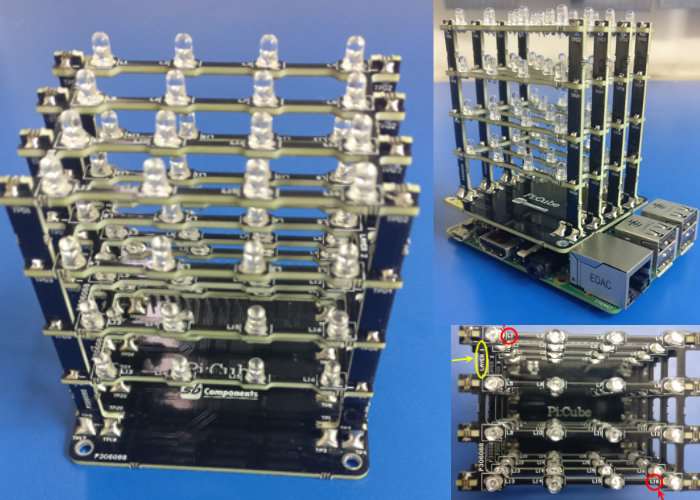 SB Components located in London has unveiled a new Raspberry Pi LED cube aptly named the PiCube which can be fitted to and controlled by Raspberry Pi 3,2, Zero and A+ depending on your requirements.

PiCube is a 4x4x4 LED Cube for the Raspberry Pi and has been designed to be used by beginners all professionals alike to strengthen their logic by typing complex code to draw out various patterns among its various uses.

Watch the video below to learn more about the new Kickstarter project. Features of the PiCube include:

• 64 high intensity monochromatic LED’s
• Available in three vibrant colors i.e. RED, GREEN, BLUE
• GPIO based operation
• 40-pin stacking header for accessing GPIO of RPi
• Each Layer as well as each LED can be individually accessed and controlled as per requirements The
• How to control 64 LEDs without using 64 individual wires? Multiplexing!
• Running a wire to the anode of each led would obviously be impractical, and would look really bad.One way to get around this, is to split the cube into 4 layers of 16×16 LEDs
• All the LEDs aligned in a vertical column share a common anode (+)
• All the LEDs on a horizontal layer share a common cathode (-)

Jump over to the official Kickstarter crowdfunding campaign by following the link below to make a pledge from £14, with delivery expected to take place during November 2017.