The photo web app called Picnik will be closing shop, less than a year after it was bought by Google. The decision by Google to shut down Picnik came as a surprise given that they were very positive after buying the company in March 2011. Times have changed, however, and with Google+  providing a Creative Kit that is similar to Picnik in terms of effects, Google decided it was time to bid goodbye to the web app. 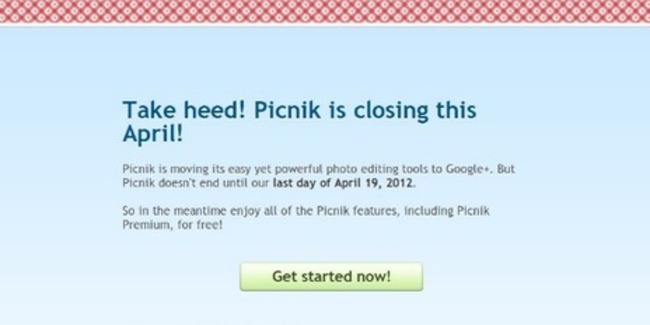 Premium subscribers will be able to get a full refund of the $24.95 annual membership fee. Picnik was not the lone web up canned with Google Message Continuity, Google Sky Map, Needlebase, Social Graph API and Urchin also being taken out.

Picnik’s team seem to take the removal of the app pretty well, as they even went on to recommend the Creative Kit of Google+. Despite this, it’s still unfortunate that a polished web app such as Picnik was bought and then squashed in less than a year. Now users are either forced to look for an alternative or stick it out with Google’s Creative Kit.