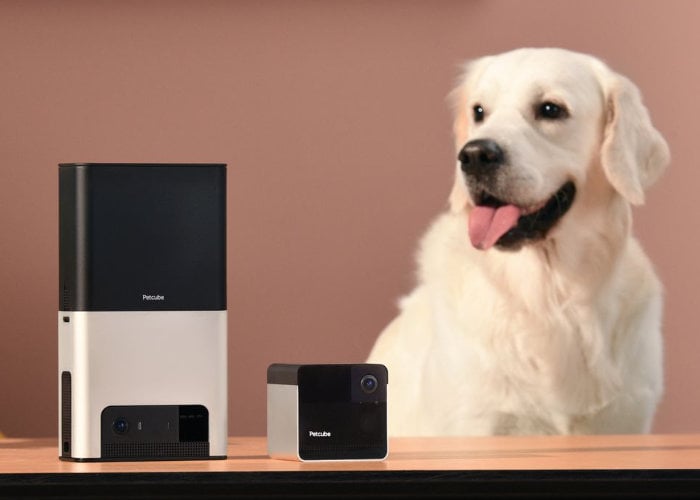 During CES 2019 this week Petcube will be showcasing two new smart pet cameras in the form of the Petcube Bites 2 and Petcube Play 2 enabling you to trigger treats for your pets using Amazon Alexa. With Alexa built-in, both devices will allow Petcube users to access over 50,000 Alexa skills, including playing music, controlling smart home devices, setting alarms, listening to the news, and checking the weather hands-free. Petcube Play 2 is the 3rd generation camera modeled off the original Petcube Camera and now features 1080p HD video, 4x digital zoom, and night vision.

The latest devices from Petcube have been completely redesigned to be all-in-one home cameras for modern pet parents. “Re-engineered for better remote experience, Petcube Bites 2 and Petcube Play 2 feature extended wide angle lens with up to 180° full-room view, best-in-class two-way audio, now with 4-microphone array, as well as significantly improved connectivity, including 5GHz WiFi support”. Watch the demonstration video below to learn more.

The Petcube Bites 2 and Petcube Play 2 cameras will be officially launching during the spring months of 2019 and will be available in two finishes either Matte Silver or Carbon Black and will be priced at $250 or $200 respectively.

“Petcube products have essentially become smartphones for pets, with average pet parent spending over 54 minutes per week interacting with their pets – more time than they talk to their parents over the phone,” said Yaroslav Azynyuk, CEO and co-founder of Petcube. “Our mission is to connect pets to the Internet and give them a voice. These new products are not just the best pet cameras on the market, with features like 180º field of view, Alexa built-in, and Petcube Care, they are one of the best home cameras available, period. That’s how the future of Pet Care looks like.”

Details jump over to the official Petcube website by following the link below.