Pepsi are leading the way in bottling technology with fresh news of their plant- based ambitions announced this week. PET (polyethylene terephthalate) is an incredible material and Coca Cola’s archnemesis has perfected  how to create it out of plant byproducts as sundry as orange and potato peel. The result is a 100% PET bottle. Coca Cola, on the other hand, only uses less than half that percentage in its own bottling. 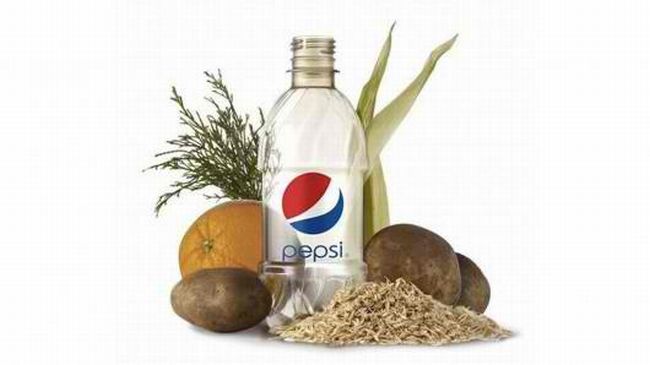 PepsiCo’s “green” bottle is 100 percent recyclable and far surpasses existing industry technologies. The bottle is made from bio-based raw materials, including switch grass, pine bark and corn husks.  In the future, the company expects to broaden the renewable sources used to create the “green” bottle to include orange peels, potato peels, oat hulls and other agricultural byproducts from its foods business. This process further reinforces PepsiCo’s “Power of One” advantage by driving a strategic beverage innovation via a food-based solution.

Combining biological and chemical processes, PepsiCo has identified methods to create a molecular structure that is identical to petroleum-based PET (polyethylene terephthalate), which results in a bottle that looks, feels and protects its product identically to existing PET beverage containers.

But check your enthusiasm people. A closer reading of the fine print reveals that these PET wonders won’t be rolled out until next year as pilot products. If it makes a splash by then, then expect Pepsi to follow through on all fronts.