Following on from his earlier creation of the Pencil Crossbow we featured here on Geeky Gadgets. Slingshot modder Joerg Sprave has been at it again and upgraded his device to be even more lethal. Watch his video after the jump showing the latest additions and amendments he has added to his arsenal of slingshots and weapons. 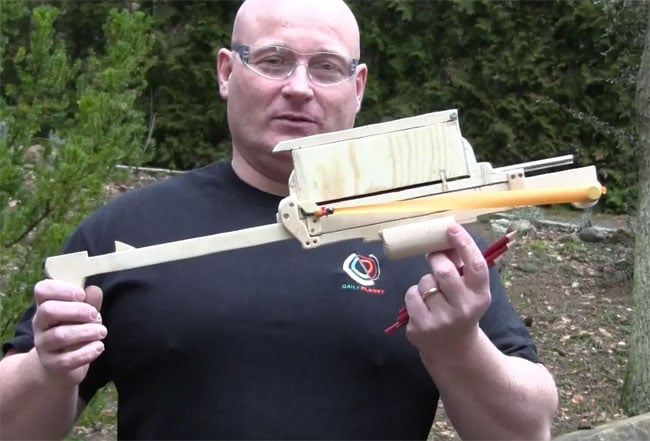 The “Nerd Revenge 2000″ is a homemade pump action slingshot crossbow that can fire 10 razor sharp pencils in under five seconds. View more amazing creations to fire objects by Joerg Sprave, over on the Slingshot channel.

“See the pencil launcher with doubled up rubber and new, specifically made arrows, see the Cold Steel blowgun and a “rivalling” homemade rubber based “Hawaiian Speargun”, watch how the Cold Steel “Voyager” does against a Zombie Head simulating coconut, plus a “meat shoe”, and last not least look at the performance of the Cold Steel Shillelagh against coconuts in super slow motion.”