Slingshot modder Joerg Sprave has unveiled his latest lethal creation this week, and this time rather than firing ball bearings his new creation fires pencils. Not only that but the pencil crossbow is also pump action and allows you to fire 10 pencils a fast as you can pump the action, over a range of 5m. Check out the new lethal pump action pencil crossbow or “Nerd Revenge 2000” as Sprave calls it in action after the break. 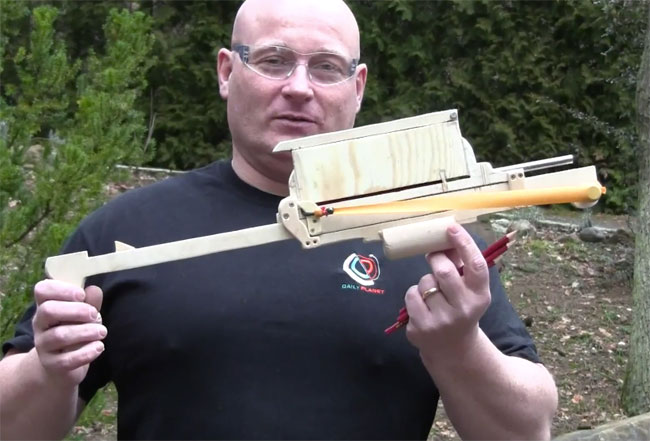 On the Slingshot channel on YouTube designer Joerg Sprave explains the Nerd Revenge 2000 was inspired by the Chinese Repeating Crossbow, but the awkward repeating action has been replaced by the clicker pump action method of reloading and firing.

“The “Nerd Revenge 2000” is a homemade pump action slingshot crossbow that can fire 10 razor sharp pencil in under five seconds. The “arrows” travel at an impressive 100 miles per hour, fast enough to go through a apple!

The compact weapon (24″ = 60cm) can also fire a “devilled” version if a pencil, with an achery field tip glued in. Then the once so harmless pencil is turned into a deadly projectile! “