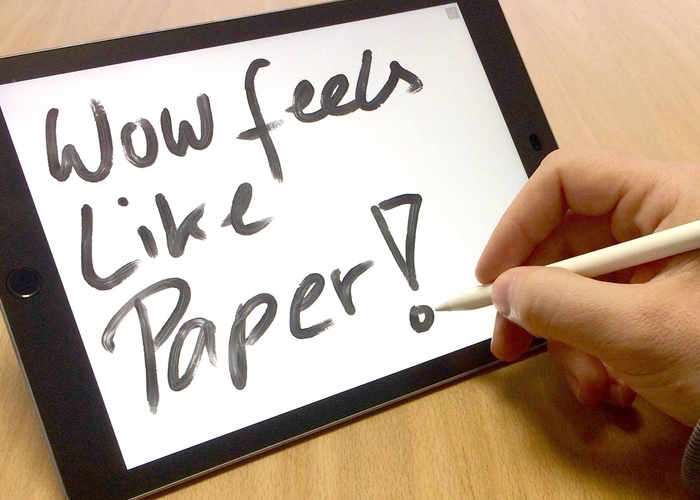 Apple Pencil users that still feel a little uneasy putting the Apple stylus on the glass screen of the iPad Pro range may be interested in a new screen film which has been created by Jan Sapper based in Hamburg Germany.

Which has been specifically created to provide a more writing on paper feel when using your Apple Pencil and iPad Pro tablet. Watch the video below to learn more about this new writing and sketching film which enhances the digital paper and pencil experience further.

For some years now I’ve been trying to go paperless. For this I tried the iPad and all kinds of styluses and it never really worked. It was impossible to write and rest the hand on the screen, styluses were not precise and mostly it was a unsatisfying experience.

Until the new iPad pro and Apple Pencil came out. I was blown away by its responsiveness and palm rejection, but regrettably the plasticky feel when writing on the iPad with the Apple Pencil really disappointed me, as I really missed the haptic feedback.

I then decided to fix this, as there wasn’t a good solution in the market. After some extensive research and testing we made the PaperLike. It is a screen shield that makes writing on the iPad Pro with the Apple Pencil feel like writing on paper. It is incredible how it completes the iPad Pro experience.

No matter if in a meeting or simply collecting thoughts. Handwriting with the Apple Notes App and the PaperLike is the most paper like digital experience ever. You can even rest your hand on the display without leaving finger marks.

For more details and demonstrations of its reflective and PaperLike qualities jump over to the Kickstarter crowdfunding website via the link below. The PaperLike iPad Pro screen protector and film is now available to back with pledges starting from just €12 for earlybird backers with free worldwide shipping included.