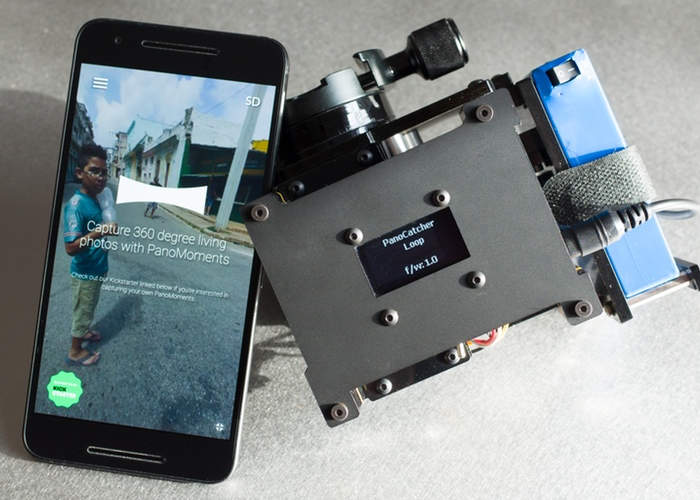 Photographers and virtual reality enthusiasts that are looking for an easy way to create 360 degree living photos and immersive virtual reality experiences may be interested in a new system called PanoMoments.

PanoMoments has been created to allow you to care much VR experiences by simply rotating your DSLR camera, smart phone or tablet. Watch the demonstration video below to learn more about its concept and features.

Dustin Kerstein from the development team based in New York, who have created PanoMoments explains more about its inspiration and design and their currently running Kickstarter campaign.

Capturing PanoMoments currently requires some prior photography experience and a willingness to tinker, but once you get the hang of it, it really is quite simple and fun. As part of the PanoMoments platform, we’ll be releasing a thorough guide, but feel free to take a look at a rough draft here. The basics are as follows:
• Capture 120+ photos around 360° using a still / video camera and fisheye lens mounted ~80mm in front of the the No Parallax Point (to emulate head rotation) and a robotic panorama base (see next section – we’re offering one as a reward).
• Convert photos to Equirectangular projection with a 4-click batch process using a lens specific template for software like Hugin (free) or PTGui ($91). No stitching required!
• Upload Equirectangular photos to PanoMoments.com and you’re done!

Time is an integral part of the PanoMoments medium and a core part of the creative process. By modifying the time period of rotation, the number of frames captured, and the exposure, you have extensive creative control of the viewer’s experience. And as a benefit of not stitching, the camera can be positioned in a way that emulates human head rotation, providing a natural sense of depth through motion parallax. If you’re interested in learning more about the capture method and lens / camera compatibility.

Our campaign’s goal is to build a free web-based platform to enable the creation and discovery of PanoMoments: a new creative VR medium that is both easy to capture and fun to explore. Our hope is to connect with photographers looking to try something new, and provide them with the hardware, tools, and guidance necessary to capture PanoMoments in their own creative vision. PanoMoments aren’t photos; nor are they videos. We call them 360° living photos, but they’re really best understood by experiencing one yourself.

For more information on the new PanoMoment system jump over to the Kickstarter website for details and to make a pledge by following the link below.