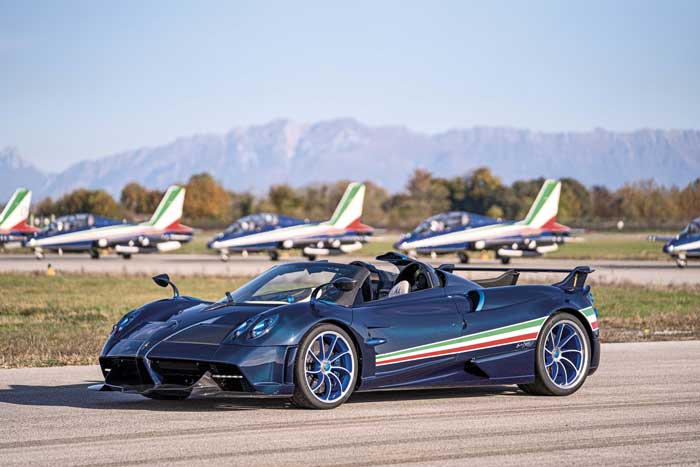 Pagani has announced a very exclusive limited-edition version of the Huayra hypercar called the Pagani Huayra Tricolore. Only three examples will be produced selling at a base price of €5,500,000 plus VAT. Each of the three examples is meant to remind of the Italian Air Force Aerobatic Team and the Aermacchi MB-339A P.A.N. jets they fly.

Some of the car’s touches include a Pitot tube mounted on the hood of the car and a new intake feeding more cold air directly to the engine. The car’s livery is in blue toned carbon fiber with red, green, and white trim reminiscent of the color scheme of the aircraft.

The Mercedes-AMG sourced V12 engine makes 840 horsepower and 1100 Nm of torque. The engine is paired with a seven-speed transmission featuring an electromechanical differential significantly lighter than a dual-clutch transmission. Only three units will be made in the run, each numbered with the same lettering used on the aircraft on the car’s rear wing. The cars are numbered Number 0, Number 1, and Number 10, reminiscent of key aircraft on the aerobatic team.