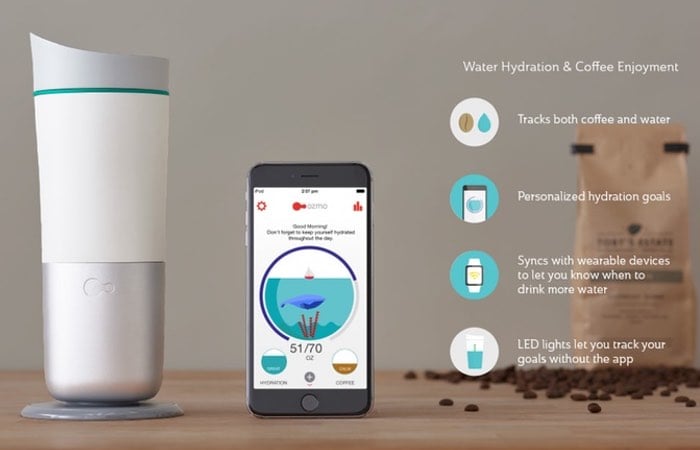 Anyone who would like to track the amount of water or coffee they drink during the day to help keep themselves hydrated and also prevent themselves from consuming too much caffeine.

Maybe interested in a new smart cup has been created by the Groking Lab based in Hong Kong called Ozmo. That comes complete with its own smartphone companion applications for both Android and iOS devices

Watch the video below to learn more about the features and functionality of the Ozmo smart cup that is capable of synchronising with fitness devices and holds up to 16 ounces of liquid.

Its developers explain a little more about the inspiration and functionality of the new Ozmo smart cup that is taken to Kickstarter to raise $25,000 to go into production.

Do you feel sluggish in the middle of the day? Does your skin look dry and wrinkled? Do you over eat at meals? If so, you’re probably dehydrated without even knowing it! Not to worry dear backers, Ozmo is here to help. The Ozmo App is designed for simplicity and its great features are shared by all our cups.

• Discover your personalized daily hydration goal
• View and track your daily beverage consumption
• Real time updates with our current hydration and caffeine intake levels
•  Manually input other beverages you have consumed for accurate calculations
• Customized reports tracking your hydration and caffeination levels by daily, monthly or annually
•  Sync with Apple Health and FitBit

Jump over to the Kickstarter website to learn more and to make a pledge from just $60 for early bird backers to be one of the first to be able to get your hands on the Ozmo smart cup.