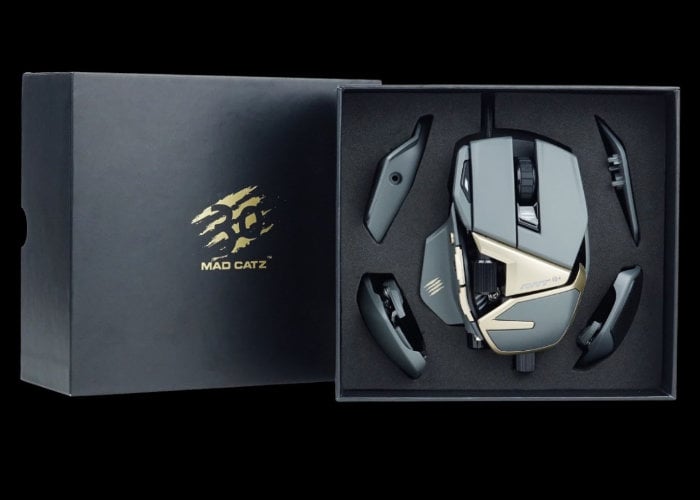 To celebrate their 30th anniversary MAD CATZ has introduced the limited edition R.A.T. 8+ 1000 optical gaming mouse. Only 1000 units will be manufactured and each will be finished with a matte black and brushed chrome design with gold color detailing. The R.A.T.8+ 1000 features industry-leading OMRON micro-switches, tested to at least 50-million clicks. Together with Chameleon RGB lighting consisting of three independent zones offering gamers a choice of 16.8 million colours.

“It’s hard to believe that it’s been 30 years since Mad Catz first arrived on the gaming scene, and the evolution of digital entertainment has been staggering to behold. Mad Catz shares the same values of innovation, value and quality as we did all those years ago and we can’t wait to share our future plans with the community in the year ahead,” said Joane Huang, Senior Director of Sales and Marketing for Mad Catz Global Limited. “The R.A.T. mouse has been a jewel in our range for some time now and we believe the limited-edition R.A.T.8+ 1000 is the ideal way to celebrate such a milestone.”

Other features of the MAD CATZ Limited Edition R.A.T. 8+ 1000 optical gaming mouse include Pixart PMW 3389 Optical Sensor, super lightweight chassis, replaceable palm rests and pinkie rests. Unfortunately, no information on pricing or worldwide availability has been released as yet, but as soon as information comes to light, we will keep you updated as always. “1,000 units of this celebratory R.A.T. 8+ model will be available in selected parts of the world for a limited time.”