3D printing allows you to bring your digital creations into the real world as solid objects, and a number of fashion designers and hobbyists have already adopted 3D printing to start creating clothes and footwear but there are imitations to the materials 3D printers are able to use.

Creating woollen garments using an affordable robot knitting machine has also been a little difficult up until now. Thanks to a new open source codes creation system called OpenKnit. 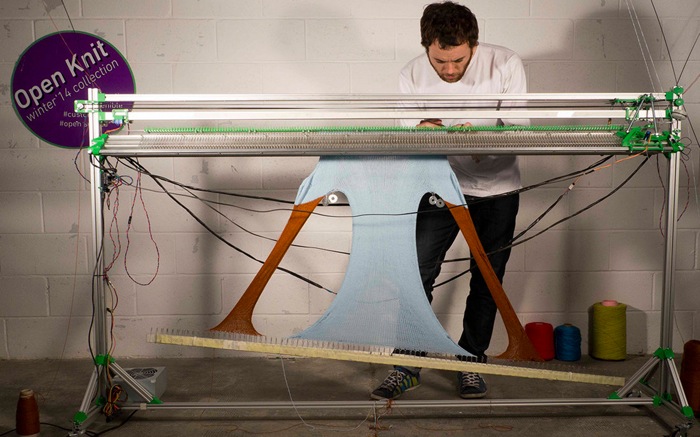 The OpenKnit system consists of 3 main parts which include a knitting machine, Knitic software that allows you to design clothes and communicate with the machine and that has been developed by Mar Canet and Varvara Guljajeva and finally an online repo, a place to share digital clothes, created by Takahiro Yamaguch.

To learn more about the unique OpenKnit system and how you can use it to create your own garments check out the video below to see the system in action.

“OpenKnit offers an alternative landscape to this production model. It’s an open-source, low cost (under 550€), digital fabrication tool that affords the user the opportunity to create his own bespoke clothing from digital files. Starting from the raw material, the yarn, and straight to its end use, a sweater for example, in about an hour. Designing and producing clothes digitally and wearing them can now happen in the very same place, rewarding the user with the ability to make decisions regarding creativity and responsibility.

In order to increase accessibility to this new tool, a step by step assembly manual is published while the software Knitic allows you to design your customized clothes easily and feed them into the printer, just a few clicks away. Do KnIt Yourself, acts as an open-source clothing platform, a virtual wardrobe that allows users to share clothes, not only with those near you.

Deeply inspired by the RepRap project, OpenKnit is an ongoing project that waits to evolve organically with/for the community. There’s a long and exciting way full of possibilities to be developed, I can think about many of them, but happily some are still unknown.”

For more information on the new OpenKnit system jump over to the OpenKnit website for details.