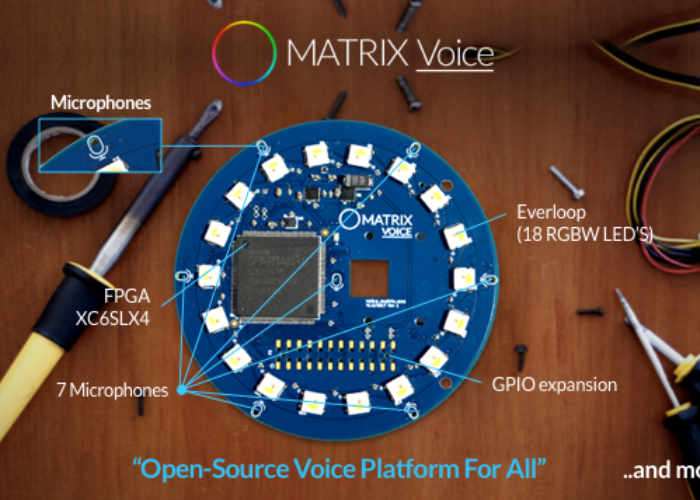 Makers, hobbyists and developers that are looking to create projects or control projects using voice recognition, may be interested in a new open source voice recognition platform called, Matrix Voice which has been designed by a small development team based in Miami Florida.

The voice recognition platform consists of a small development board which measures 3.4 inches in diameter and is equipped with a radial array of 7 MEMS microphones connected to a Xilinx Spartan6 FPGA & 64 Mbit SDRAM with 18 RGBW LED’s & 64 GPIO pins.

Watch the video below to learn more about this voice recognition platform which is both open source and now available to back via Indiegogo for just $45 with shipping expected to take place in a couple of months time during May 2017.

The development team behind Matrix Voice explain more about its design and inspiration.

MATRIX Voice was built with a mission to give every maker, tinkerer, and developer around the world a complete, affordable, and user-friendly tool for simple to complex Internet of Things (IoT) voice app creation.

Learn more about the open source voice recognition platform from the Indiegogo website by following the link below. If you are interested in building Arduino projects these may provide inspiration for your next project. You might also be interested in our comprehensive list of Raspberry Pi displays, HATS and small screens.