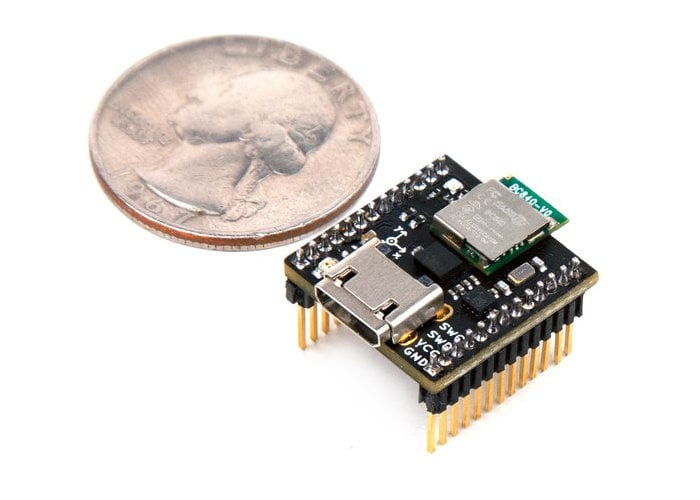 Bluetera II is an open hardware IoT solution powered by 9-axis motion sensors, an MCU with support for BLE 5.0, and an SDK based on Google’s Protocol Buffer technology. The small development board will be soon available to purchase via the Crowd Supply website. Offering a full stack development board using protocol buffers for motion-based IoT applications and has been created to fill the gap for an open source platform that satisfies the following requirements :

– A system-level API that properly encodes and delivers data from the end-node to the client application, often running on a mobile phone
– A way to simplify 3D motion data that would otherwise require users to master non-trivial and sometimes counter-intuitive concepts and mathematics
– Physical characteristics appropriate for an Internet of Things (IoT) platform: robust, low-power, extensible, and as small as possible

Protocol Buffers is a battle-tested, schema-based serialization library developed by Google. An SDK built on Protocol Buffers allows our API to pass information between the various layers of an IoT system in a way that is efficient, extensible, and even beautiful. That API, which integrates with Nordic’s nRF SDK, will save you from having to do a great deal of boring, time-consuming, error-prone work that requires expertise in many different frameworks.”

A provided SDK offers a seamless link to all system elements making it easy for software and hardware developers to utilise. Bluetera II is compatible with all major desktop and mobile operating systems and bridges the gap between hardware and software. While streamlining the creation of sophisticated, low-power, motion-related IoT projects says its creators.

Specifications of the Bluetera II include :