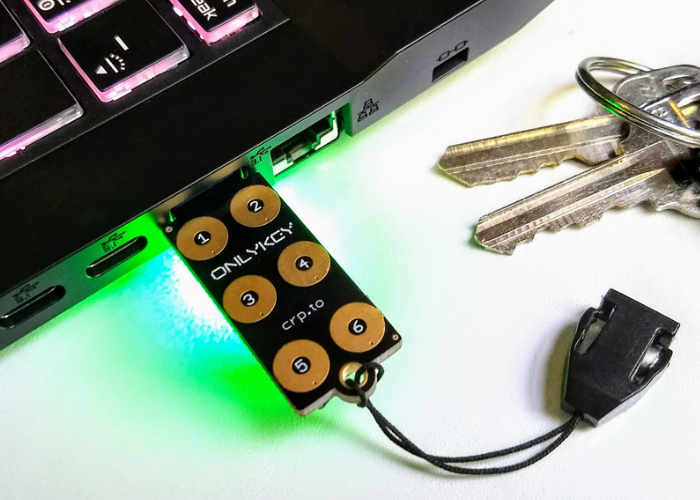 – Private messengers like Signal, Whatsapp, and Telegram. Telegram actually already has an open source web application that could easily be integrated with OnlyKey – https://web.telegram.org.
– Mailvelope – Popular extension for adding OpenPGP to Webmail.
– Keybase – As shown in the demo, we can already store the private key from Keybase on OnlyKey. However, Keybase has other apps with device keys that do things like encrypt local file storage, encrypted chat, and even encrypted Github repos. It’s pretty amazing! If integrated, OnlyKey could store these device keys safely offline.
– MyEtherWallet – A free, open-source, client-side interface for generating Ethereum wallets. – https://www.myetherwallet.com.
– Protonmail – Popular open source encrypted email.
– GPG – We are already working on a GPG agent that would integrate with GPG to support multiple apps.

Tim explains more about the inspiration behind OnlyKey Quantum and its features :

If you have ever tried to communicate securely online you would probably not describe the experience as convenient. So far, no other solution works practically everywhere or with everything. If it’s convenient, you may not be as secure as you think. If it’s really secure, you likely have nobody wanting to use it to communicate with you because it’s a hassle. We are making the world’s first universal encryption device that is future ready and works practically anywhere, with no technical skills or difficult set-up required. Plug it in and it works. It’s designed with the perfect balance of convenience and security in mind.

Some friends are on Signal, others are on Facebook Messenger, and then work friends use Slack or something else. How do we communicate securely if the messaging platform is not built to be secure? The answer is to encrypt the text before you send it. Using our OnlyKey Chrome extension, you simply add a list of friends to whom you’d like to send encrypted messages. The message is encrypted and signed by your OnlyKey, and the encrypted text is sent over the chat or email. When your friend receives the message, they use their OnlyKey to decrypt.