The Raspberry Pi Foundation has this week announced that they have passed 1 million sales of their awesome Raspberry Pi Mini PC, which was originally developed to stimulating the teaching of basic computer science in schools.

Even though figures are not quite up to date the Raspberry Pi Foundation is confident that the figure has been passed and Element 14 one of the Raspberry Pi’s official distributors, created a infographic detailing that it alone has manufactured over 500,000 Raspberry Pi systems so far. 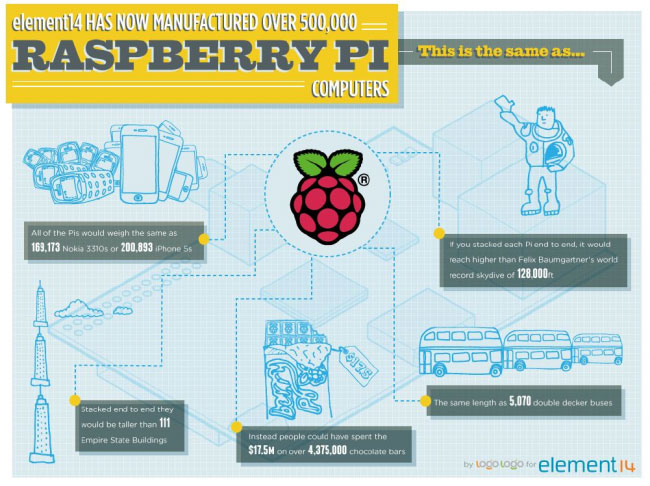 The Raspberry Pi launched in late February 2012 and was manufactured through licensed manufacturing deals with Element 14/Premier Farnell and RS Components.

“The idea behind a tiny and cheap computer for kids came in 2006, when Eben Upton and his colleagues at the University of Cambridge’s Computer Laboratory, including Rob Mullins, Jack Lang and Alan Mycroft, became concerned about the year-on-year decline in the numbers and skills levels of the A Level students applying to read Computer Science in each academic year. From a situation in the 1990s where most of the kids applying were coming to interview as experienced hobbyist programmers, the landscape in the 2000s was very different; a typical applicant might only have done a little web design.”