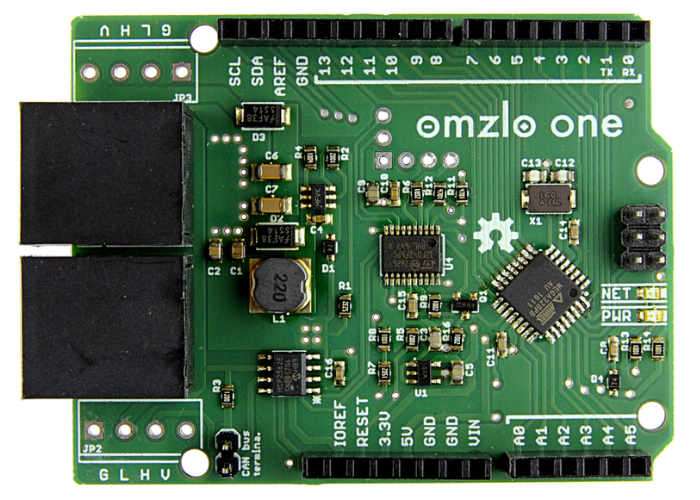 If you are interested in building Internet of Things applications or other network connected Arduino projects, you may be interested in the new Arduino development board which has been created by Alain Pannetrat based in Athens, Greece.

The Omzlo One takes the form of an Arduino-compatible board which comes complete with built-in networking that can be easily connected to a PC for any IoT applications you may be developing.

Features of the Omzlo One Arduino board include:

• You can use an Ethernet cable — or just 4 plain wires — to connect your Omzlo One devices to one another in a chain that can reach well over 100 meters (300 feet)
• One cable is used to bring both power and a CAN bus network at 125 000 bps – No batteries needed (like PoE).
• It features an Atmega328pb 16Mhz microcontroller with Arduino Uno binary and pin-level compatibility so that you can easily re-use your exiting designs.
• You control your network with the Omzlo USB controller connected to a PC or a Raspberry Pi, through a simple web interface.
• You can use the “Nocan” library and the Arduino IDE to make your devices talk to each other, with a super-simple “publish/subscribe” protocol, without worrying about the nitty-gritty details of CAN bus networks.
• You can use a web interface to upload Arduino sketches to any device in your network, without the need to physically plug a programmer in your device.
• You can use a simple Web interface to control your devices, reboot them, enumerate them and upgrade them.
• It’s open source / open hardware.

Jump over to the Kickstarter crowdfunding website to be able to get your hands on one of the first Omzlo One Arduino boards off the production line for just €24, with shipping expected to take place during October 2017.