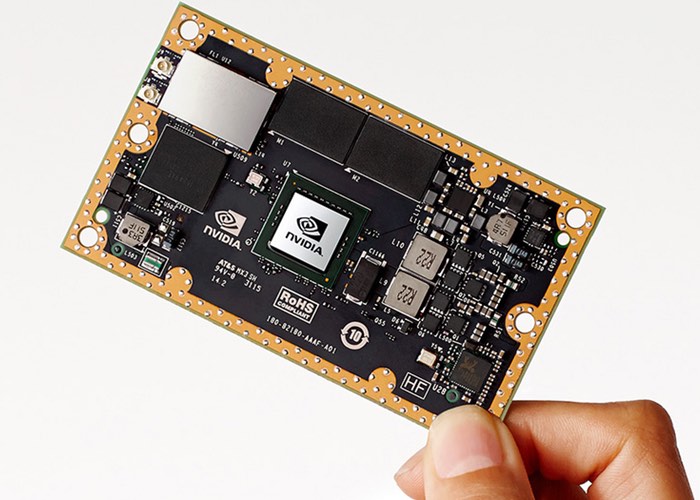 NVIDIA has unveiled a new mini supercomputer in the form of the Jetson TX1 module that measures just 50mm x 87mm in size and has been specifically designed to bring artificial intelligence to the next generation of autonomous drones and robots.

The pocket-sized supercomputer is equipped with a 64-bit ARM A57 processor that is supported by a one teraflops, 256-core Maxwell architecture-based graphics processor, offering best-in-class performance says NVIDIA.

Other features include 16GB of on-board eMMC storage together with 4GB of LPDDR4 as well as support for 1GB Ethernet, 802.11ac 2×2 and Bluetooth connectivity, all running the operating system Linux for Tegra. Deepu Talla, vice president and general manager of the Tegra business at NVIDIA explains more :

Jetson TX1 will enable a new generation of incredibly capable autonomous devices. They will navigate on their own, recognize objects and faces, and become increasingly intelligent through machine learning. It will enable developers to create industry-changing products.

The Jetson TX1module is also built into a Developer Kit than has been created to enable hobbyists and professionals to develop and test highly advanced autonomous devices they have created and comes with a comprehensive SDK offering :

– cuDNN is a CUDA-accelerated library for machine learning. For both training and inference, it is compatible with many industry-standard frameworks, including Caffe, Theano and Torch.

– VisionWorks is a CUDA-accelerated library and framework for computer vision. It is an implementation of the OpenVX 1.1 specification with additional NVIDIA extensions.

– Support for the latest graphics drivers and APIs, including OpenGL 4.5, OpenGL ES 3.1 and Vulkan.

The NVIDIA Jetson TX1 Developer Kit can be preordered starting Nov. 12 for $599 in the US and we will be rolling out to other markets over the next few weeks. The Jetson TX1 module will be available in early 2016 and will be priced around $299 for retail. For more details on the Jetson TX1 module jump over to the official NVIDIA website via the link below