Two students from ENSCI – Les Ateliers, a French National Institute of Industrial Design has came up with the invention of a fun and colorful food-based musical instrument which they named Noisy Jelly. 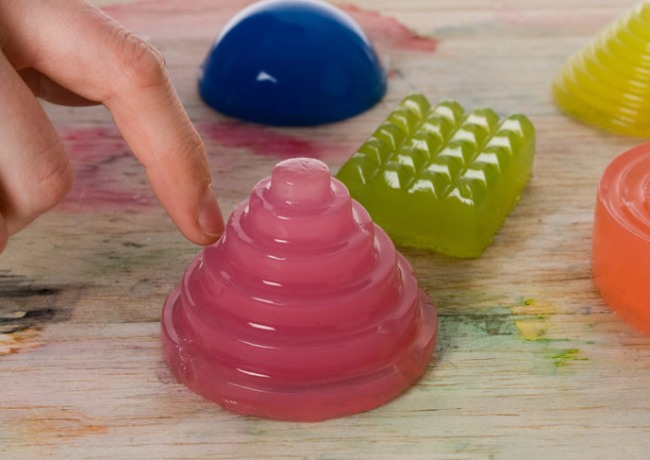 The reason for making the Noisy Jelly is primarily not to create a musical stuff, but to make an entertaining game board out of these students’ interests. This Noisy Jelly game board, however, is made up of a gelatin preparation, a capacitive sensor board that runs on required software programs.

Food designer, Marianne Cauvard who has a great interest with gelatin uses few grams of agar agar powder, food colorings, plain water and different geometric shapes of molders to create the jellies. After the jellies had made, they are now placed on top of the game board.

A product designer named Raphael Pluvinage is the master mind behind the virtual and physical systems that enable the sensors to react and produce high and low-pitched audio signals upon touching the shapes.

Concentration of salt, contact pressure, distance of touch and variations of gelatin shapes are main factors by which they affect the loudness and the types of sound produced.

Then it’s done! This wobbly gelatin producing sounds can now enjoy and be played by kids and even adults too.