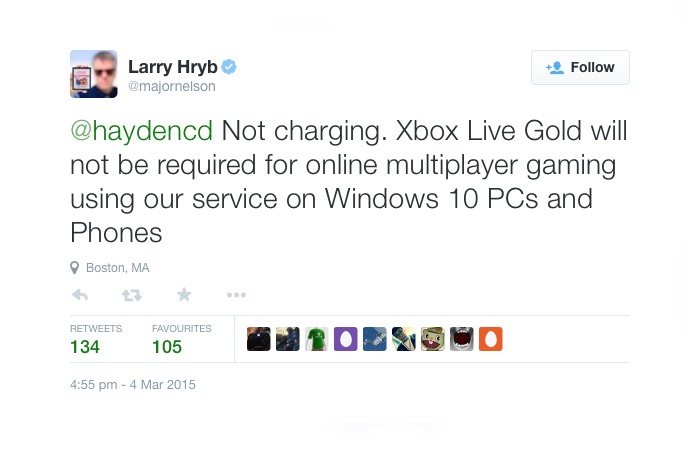 Gamers looking forward to using Xbox Live on Microsoft’s new Windows 10 operating system, which is currently still under development and available in its preview release.

Will be pleased to know that Larry Hryb from the Major Nelson Xbox website has today revealed via a tweet that Xbox Live online multiplayer features will be free of charge on Windows 10 when it launches later this year.

Unfortunately no other information has been released by Microsoft at the current time for their Xbox Live Windows 10 integration, but as soon as more information becomes available we will keep you updated as always.

Last month Microsoft made available a new update for its Xbox app for Windows 10 as part of Microsoft’s continued efforts to provide monthly updates to the Xbox app.

If you are interested in downloading the Windows 10 technical preview jump over to the official Microsoft Windows website where the ISO is available to download for you to do to a disc. Microsoft explains

“After you’ve installed Windows 10 Technical Preview, you won’t be able to use the recovery partition on your PC to go back to your previous version of Windows.