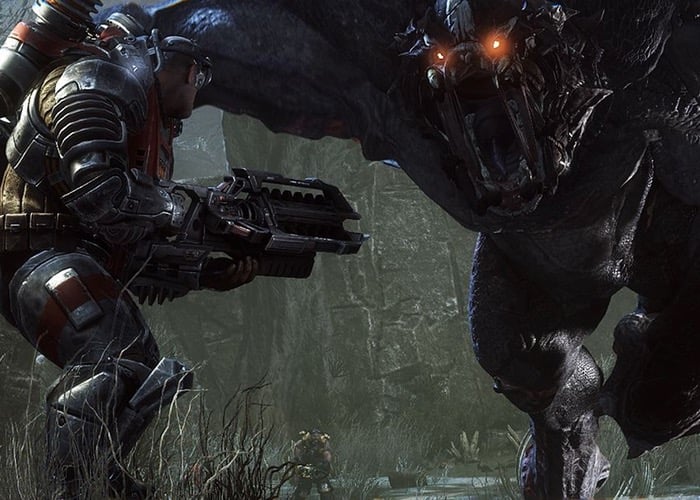 As previously announced the new Evolve open beta kicks off today for all those Xbox gamers that are unlucky enough to be Xbox Live Gold account holders.

No code is required to start playing the Xbox Evolve open beta and the game is now available to download with access starting at 9am PST offering the ability to enjoy two playable monsters in the form of the Goliath and Kraken.

The open beta also offers 8 hunters and 12 playable maps, and if you preorder the Evolve game, any hunter or monster characters unlocked during the beta will carry over to the Evolve retail game launch next month on February 10th 2015.

Evolve is available for pre-order and pre-download from the Xbox Store online, with two versions available to choose from, priced at £70.99 for the Evolve Digital Deluxe and £54.99 for the standard Evolve game.

“The Evolve Digital Deluxe edition to get the main game plus the Monster Expansion pack and the Hunting Season Pass. The Monster Expansion pack includes the first downloadable monster when available and the Savage Goliath skin instantly. The Hunting Season Pass includes 4 new hunters and 3 exclusive Magma monster skins. Includes insant unlock of Third Characters Set of hunters and Wraith.”

For more information on the new Evolve open beta jump over to the Xbox One website for details and the ability to pre-purchase both versions of the game.