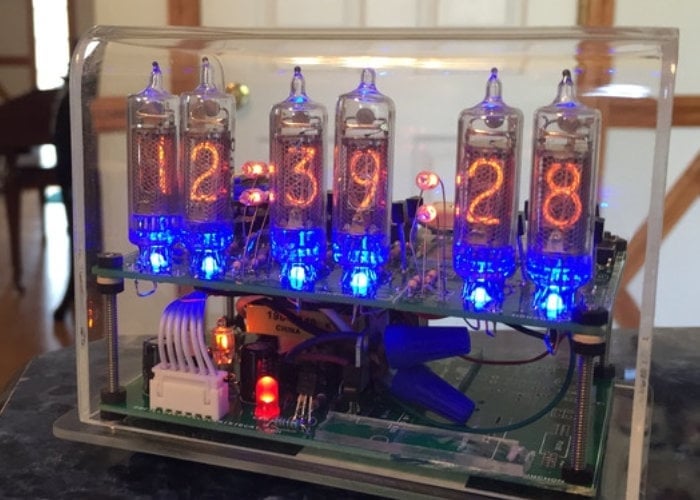 Howard Constantine has taken to Kickstarter to raise funds to take his miniature six digit nixie clock into production. The Nixie Clock X features both wireless connectivity and GPS and utilises IN-16 nixies or CD-79 Nixie tubes. Earlybird pledges are available from $45 for the PC boards and microcontroller or $125 for the complete Nixie Clock X basic kit.

“The Nixie clock X is a six digit version of the miniature nixie clock I created in my previous project. It has a seconds count for a more dynamic look. The prototype is a cobbled together project with a bit of point to point wiring, but the production version will be all pcb and will include RGB leds for selected colors for the underlighting. It can be driven by either a gps module or a wifi module, as in the four digit version, or set manually.”

“The enclosures shown are homemade, as always. I form them from 1/8″ plexiglass. The cover sits loose on top of the base like an anniversary clock dome. The deluxe version is available with a blue tinted cover, as well as the standard clear cover. The bottom board contains the power supplies & wave shaping circuits, and the top board holds the digit drivers, microcontroller & decoder, and the nixies, as well as the gps or wifi module, if equipped. As always, I use standard size components in my design, not small surface mount. The Nixie clock IX is also available in kit form, for those who may already have their own nixies, or want to create their own enclosure, or just enjoy the challenge of building it themselves!”