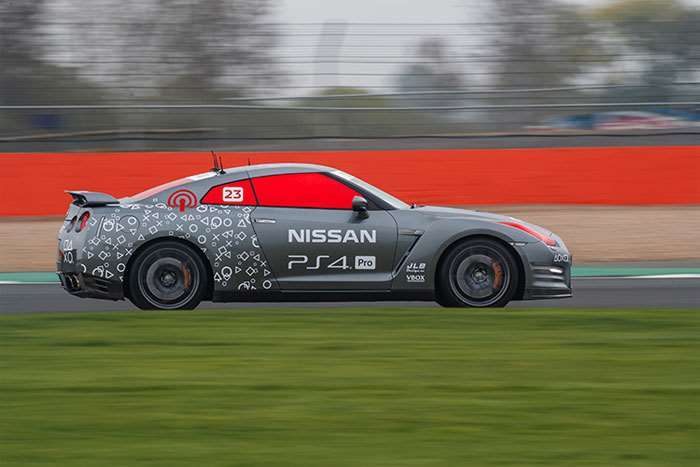 Nissan has created a sweet GT-R that is controlled remotely using a DualShock 4 controller. The vehicle was built to celebrate the pending launch of Gran Turismo Sport on October 17. The GT-R /C has a bunch of robotic systems inside to control steering, braking, throttle, and transmission.

The driver of the car uses a PS4 DualShock 4 controller that was connected to a microcomputer to send commands to the car and hustle it around Silverstone raceway. To make controlling the car easier the driver was flown around behind the car in a helicopter and the remote system had a range of 1 km.

The car was able to lap Silverstone in 1:17.47 and reached a top speed of 131 mph with an average speed around the track of 76 mph. The driver is the winner of the latest season of GT Academy, Jann Mardenborough.

“This was once-in-a-lifetime, truly epic stuff,” said Mardenborough. “The GT-R /C has brought my two worlds together – the virtual of gaming and the reality of motorsport – in a way I never thought possible. The response from the car when using the controller was far more engaging than I thought it would be. JLB Design has done an incredible job at making everything respond really well. Steering, acceleration, and braking were all intelligently configured, allowing for controlled application so I could really get a feel through the corners and hold it steady down the fast straights. Driving a full-size, remote-control GT-R to 131 mph at Silverstone whilst chasing it down in a helicopter was an unforgettable experience. Now that’s innovation that excites!”